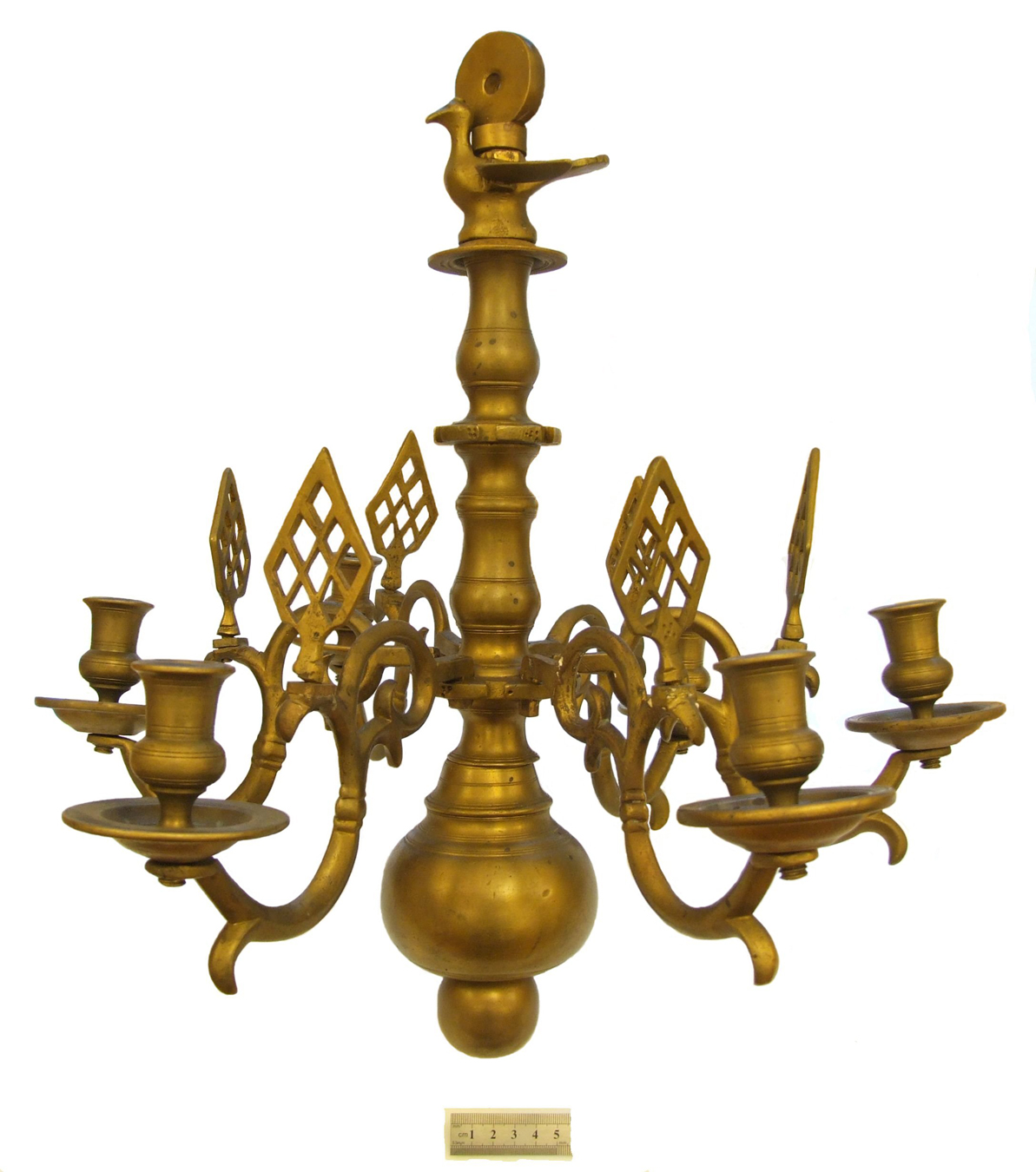 The National Museum of Lithuania

According to written sources, bronze/brass chandeliers with six arms were the most popular among hanging lighting fixtures in Lithuania in the 17th century [1]. This hanging candlestick preserved in the National Museum of Lithuania could be a typical lighting device of the mentioned period. However, a closer look at the ware evidences that the chandelier consists of elements made in different periods.

The oldest parts are tracery rhombus-shaped decorations — reflectors. Three of them are of yellowish-warm gold colour, and the other three are darker and rougher in work — most likely they were cast for the chandelier a little later. A caster marked each reflector closer to the mounting point with embossed numbers from ‘1’ to ‘6’. All the arms of the chandelier and the recesses to receive them are marked in the same manner. Marking of chandelier’s parts is typical of many surviving handmade chandeliers in Lithuania of the late 16th – 1st half of the 19th century.*

The stem of the chandelier, like the arms, is a little darker in colour and cast in bronze. At the top, the stem is decorated with a stylised bird figure and a large ring resembling of a perpendicularly erected millstone. The chandelier’s stem is thread from profiled tubes and two drilled discs between them to receive arms and reflectors. The upper disc was designed for reflectors, which, unfortunately, did not survive. In the lower disc, there are six arms with the tracery decorations — reflectors as mentioned above. The twisted and S-shaped arms are typical of the Baroque period but also widely reproduced in the 19th century. Chandeliers with identical arms are present in the Šiauliai ‘Aušra’ museum, P. Smuglevičius Hall in the Vilnius University Library, and several churches in Poland. The stem of the chandelier terminates with a large pear-shaped sphere and a smaller one beneath. Later restoration can make such termination of the stem, which was less frequent both in Lithuania and in other European countries.

The different material and slightly unusual shape of the stem’s terminal beneath allow us to assume that the main parts of the chandelier were made in the 18th – 1st half of the 19th century. In addition, reflectors were reused from the older chandelier of the 17th century. It is a Lithuanian variety of the Dutch type chandelier that has widespread throughout Europe.

* Parts of the handmade chandeliers of the 16th – 1st half of the 19th century were not identical. Therefore, each part has a specific place in the bowl. For this reason, the parts were numbered.