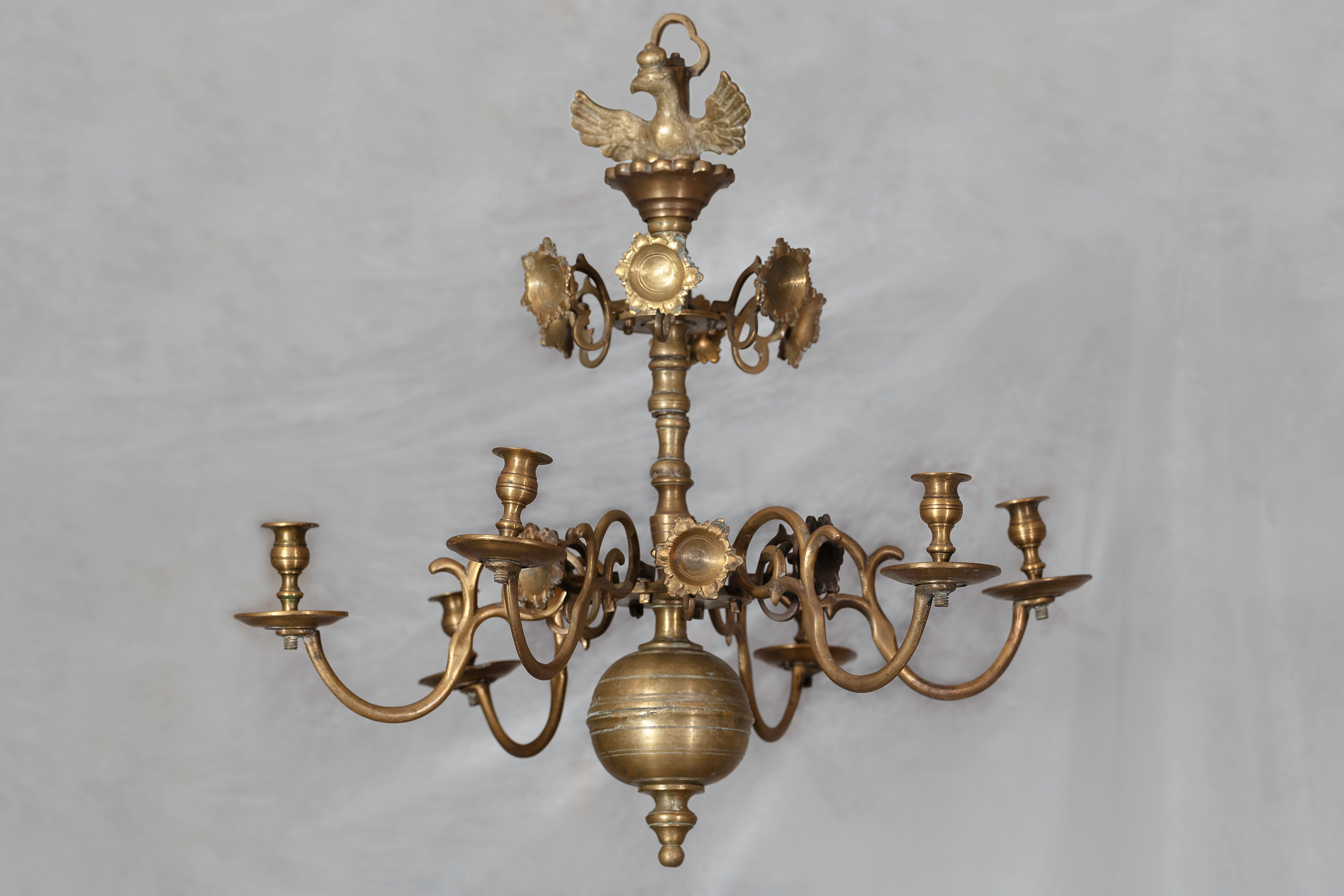 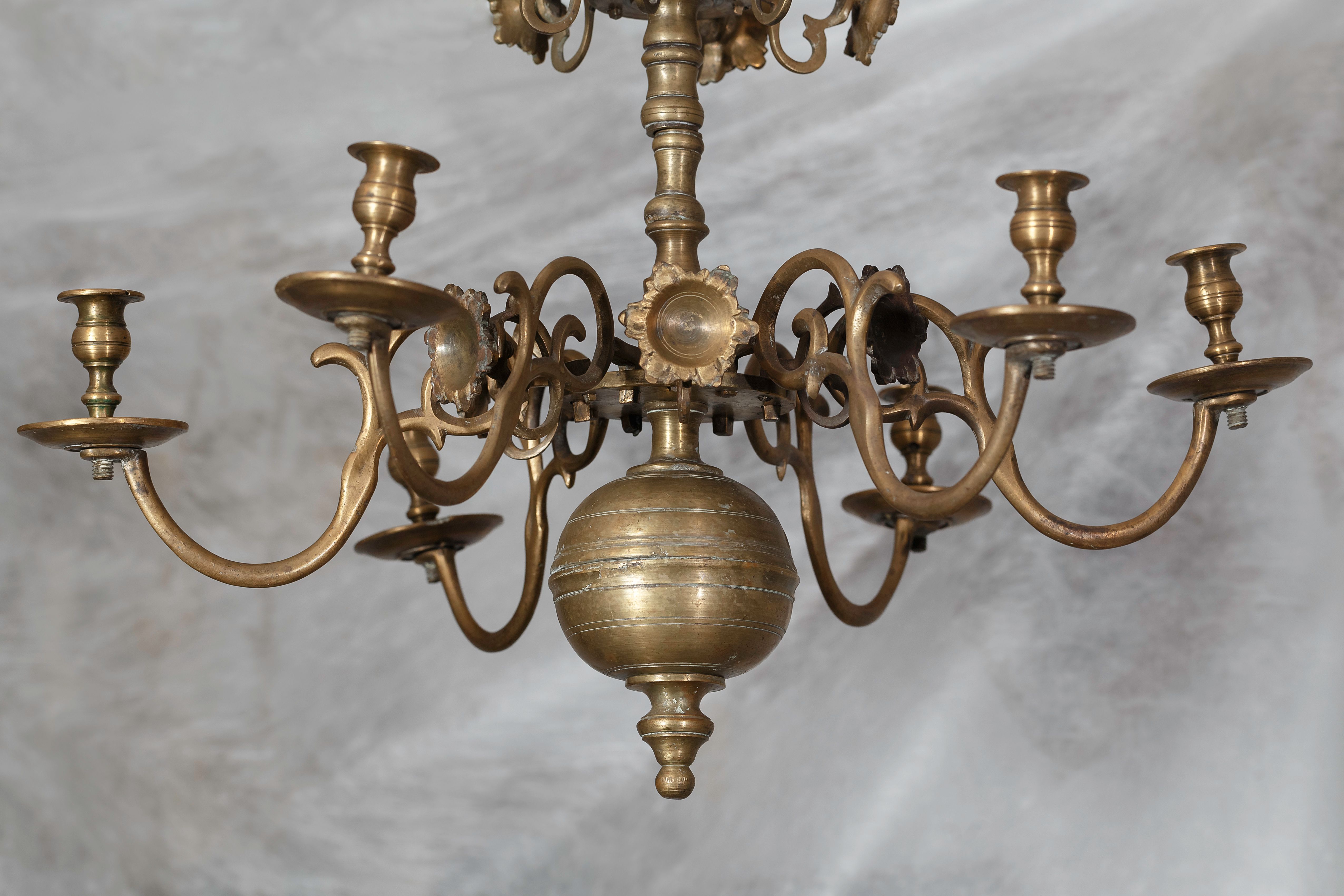 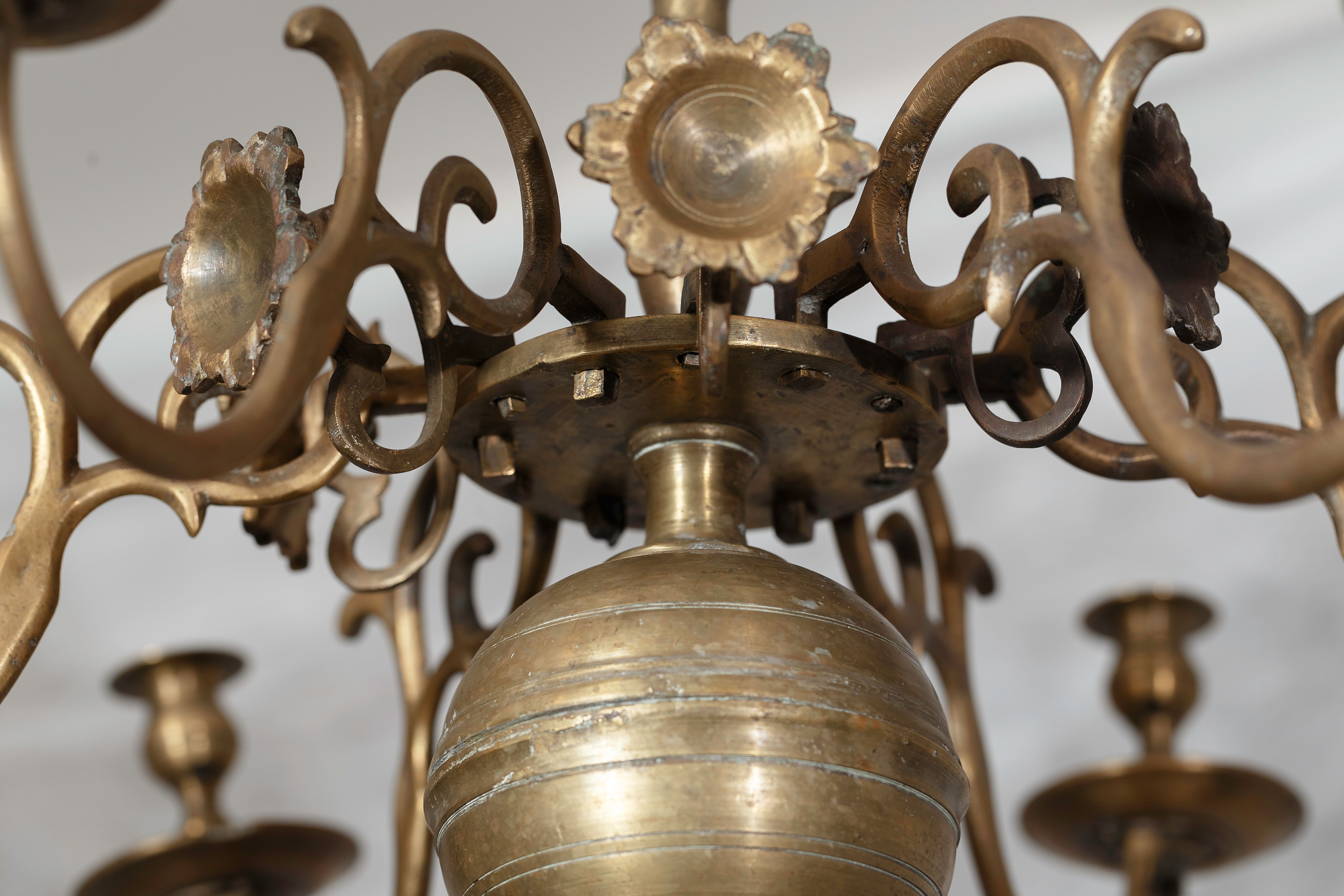 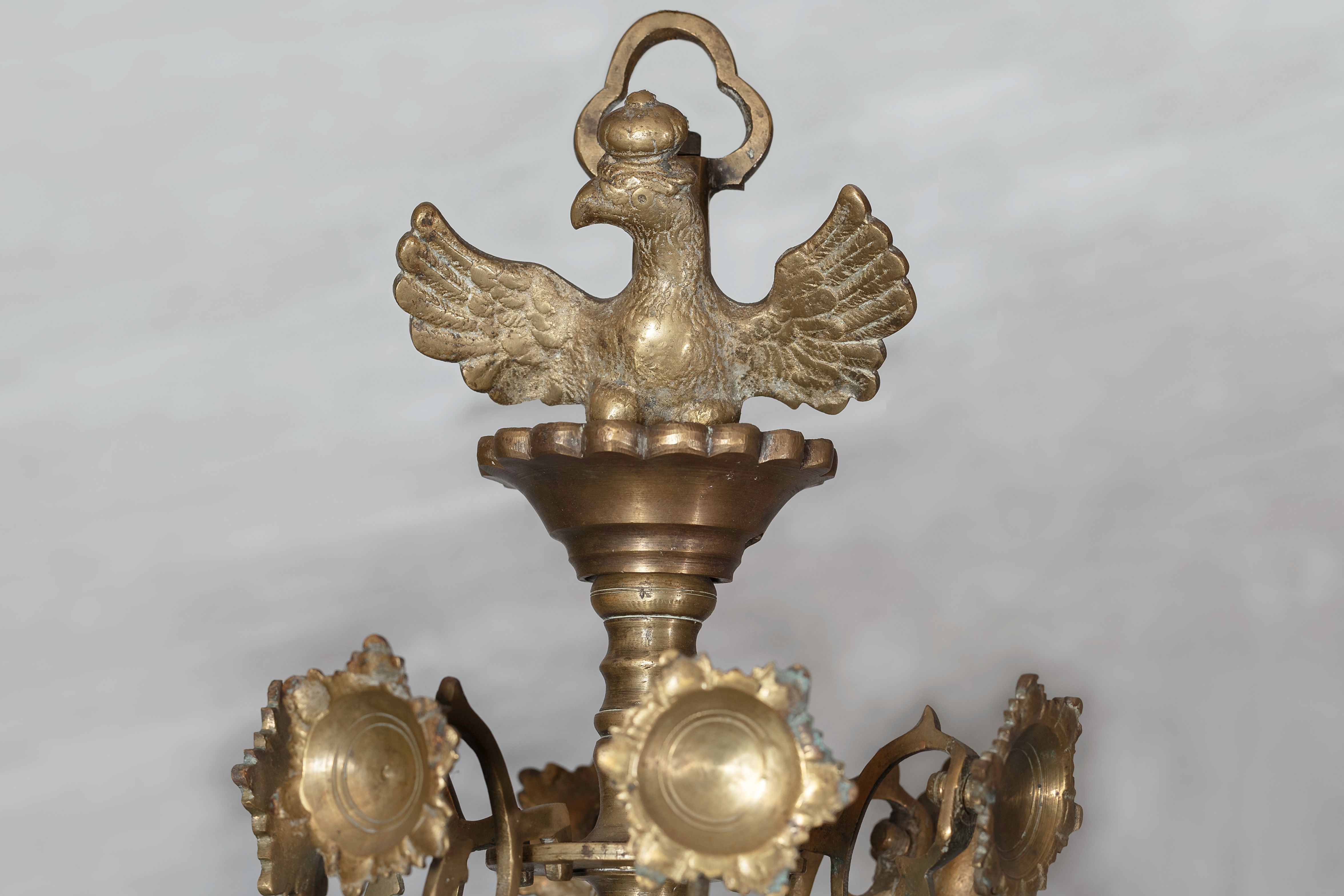 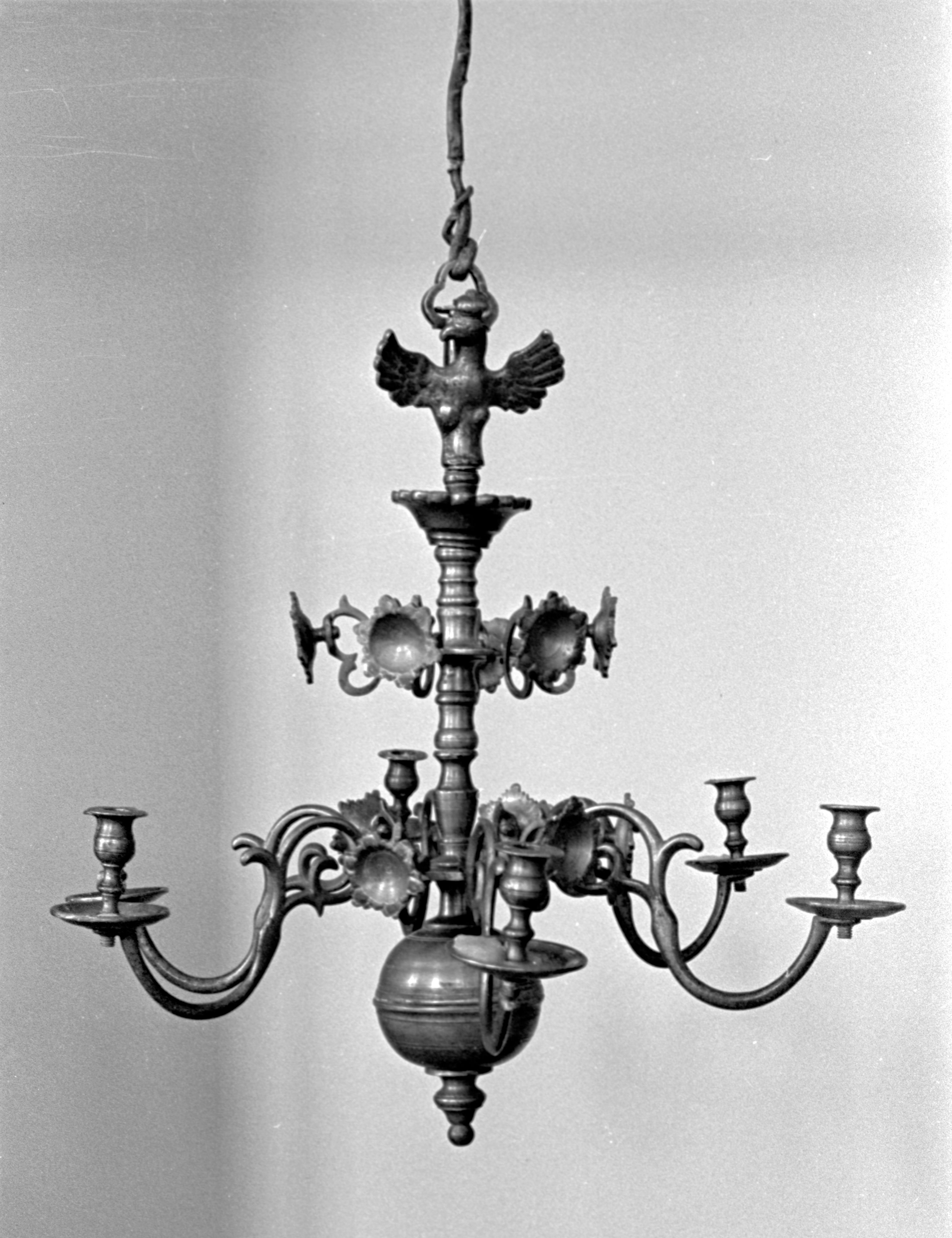 A chandelier preserved in the National M. K. Čiurlionis Museum of Art belongs to the oldest and the most common stem type. Such lighting devices with a large sphere beneath the stem were started to produce in the Netherlands along with the establishment of Baroque culture in the 17th century. They widely spread throughout Europe, and because of their origin are often referred to as Flemish or Dutch chandeliers.

The chandelier’s stem is thread from profiled tubes and two drilled discs to receive arms and reflectors. A trifoliate-shape loop for hanging is at the top of the stem and a figure of the crowned eagle with spread wings looking to the left. One-headed or two-headed eagle is a common decoration element of the baroque chandeliers. It could have served as a symbol of family, country/empire or had a broader meaning. A similar chandelier from the 18th – early 19th century, which used to hang in the synagogue, is kept in the Lviv Museum of Ethnography and Crafts [2]. Similar examples are found in Polish churches as well [3]. According to chandelier researcher J. W. Hołubiec, spider-shaped chandeliers with crowned eagle figures, the heraldic symbol of the Kingdom of Poland, were incredibly popular in interwar Poland [1]. It can be noticed that in Poland, they are very much in circulation today (search phrase on the internet: Żyrandol w stylu Księstwa Warszawskiego).

This six-arm chandelier was dismantled and photographed in 1979 and 1981. The photographs evidence that one profiled tube that was under the eagle’s feet at the top of the chandelier in 1981, is currently thread in the middle of the stem making the chandelier visually longer. Although the arms of the chandelier and holes to receive arms were anciently marked with a specific number of embossed dots, such feature as shallow and narrow drip pans to catch falling wax, the quality of the chandelier’s performance, and surface wear suggest that it was made not in the early Baroque period but rather in the late 18th – 19th century.