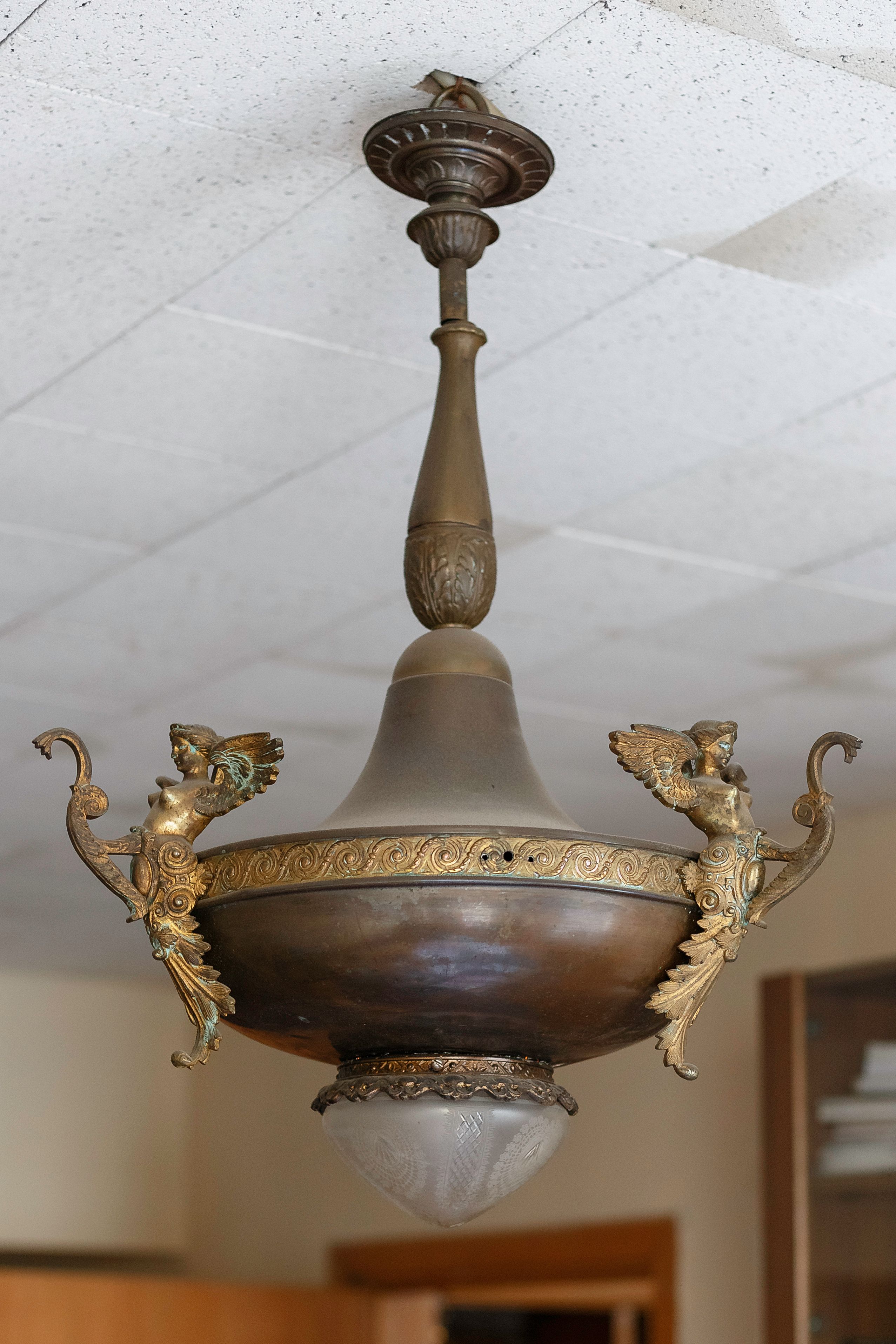 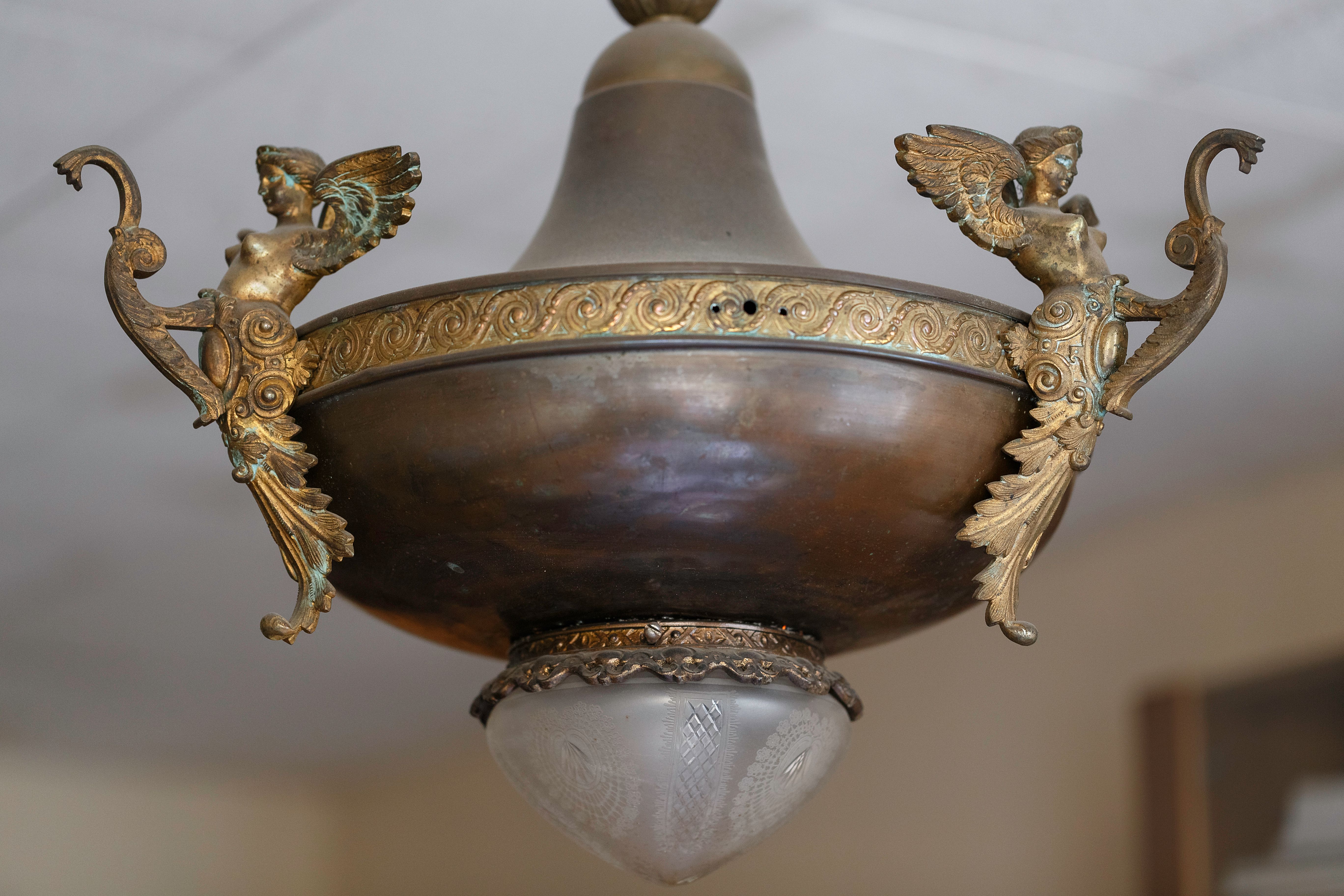 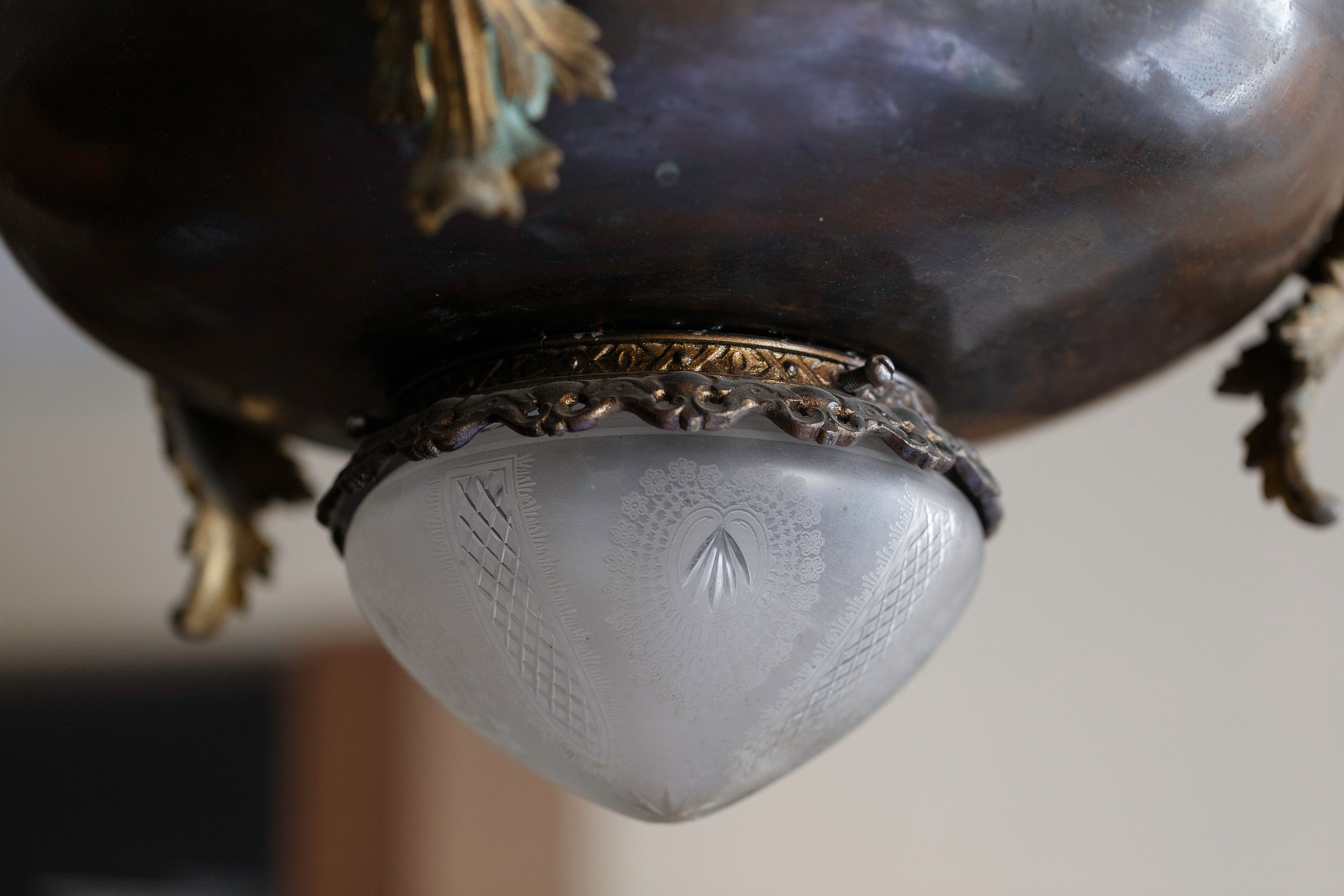 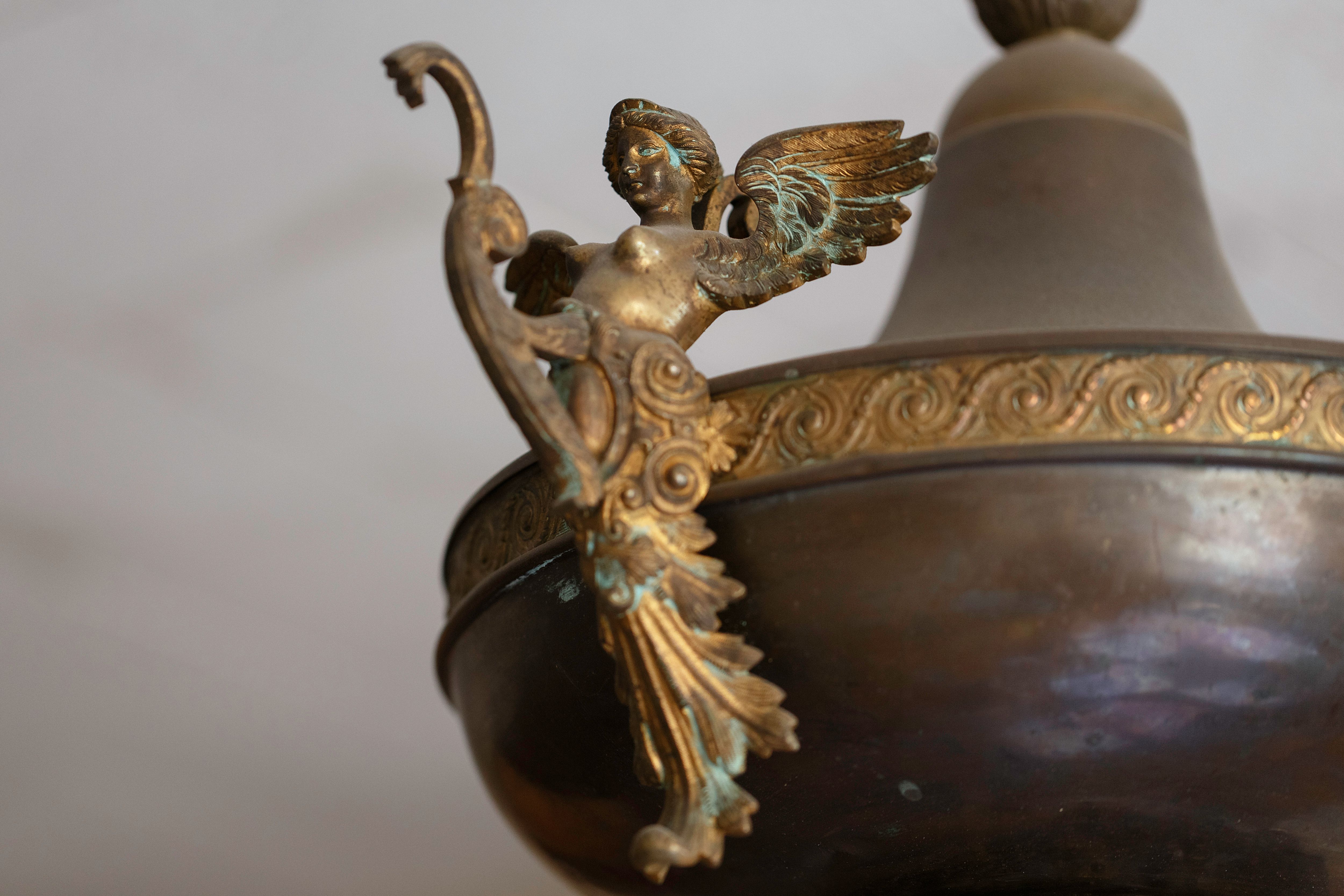 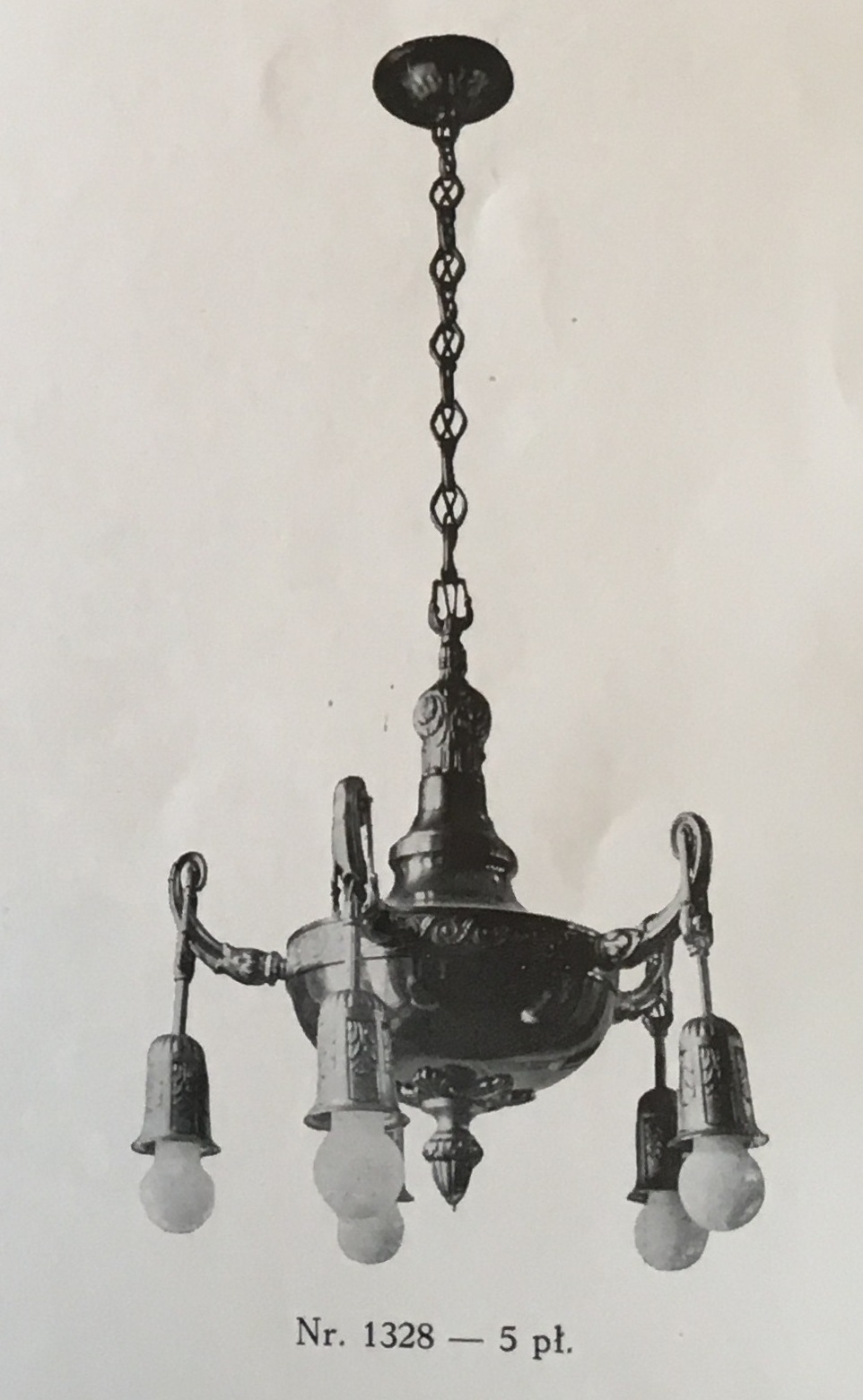 Many may be hesitant about whether this lightning ware can be called a chandelier. Indeed, to date, the ware looks like a lamp. However, if we returned all the lost parts, it could be termed a chandelier.

It is a stem-type chandelier. Its baluster and closed dish are repoussed from a copper tin, which may have been blackened in the past. An opaque lamp cap beneath is carved with small patterns typical of the art nouveau style and flowers. The dish is surrounded by a bronze cast ring and three fantastic female figures with curved vests and wings instead of arms. The figures protruding to the sides of the chandelier look unfinished. Therefore, there is a feeling that the chandelier is missing something. In addition, such a chandelier with a single-cap bulb beneath had to be extremely dimly lit.

After reviewing the catalogue* published in 1928 by the Nowik & Serejski chandeliers factory in Warsaw, it can be seen that similar closed dish-shaped chandeliers had arms with the electric bulbs lowered down (Figure 5). Likely, the chandelier in the National M. K. Čiurlionis Museum of Art had similar bulbs with caps lowered down from each figure.

A beautiful chandelier that survived not intact could have been made in a large metallurgical factory in Warsaw in the 1900s–1920s. The ware belongs to the neo-Empire style but also has parts typical of the art nouveau style. It is the only chandelier with such a structure preserved in Lithuanian museums.

* I thank my colleague Eglė Bagušinskaitė for a copy of the catalogue of Nowik & Serejski chandeliers factory.