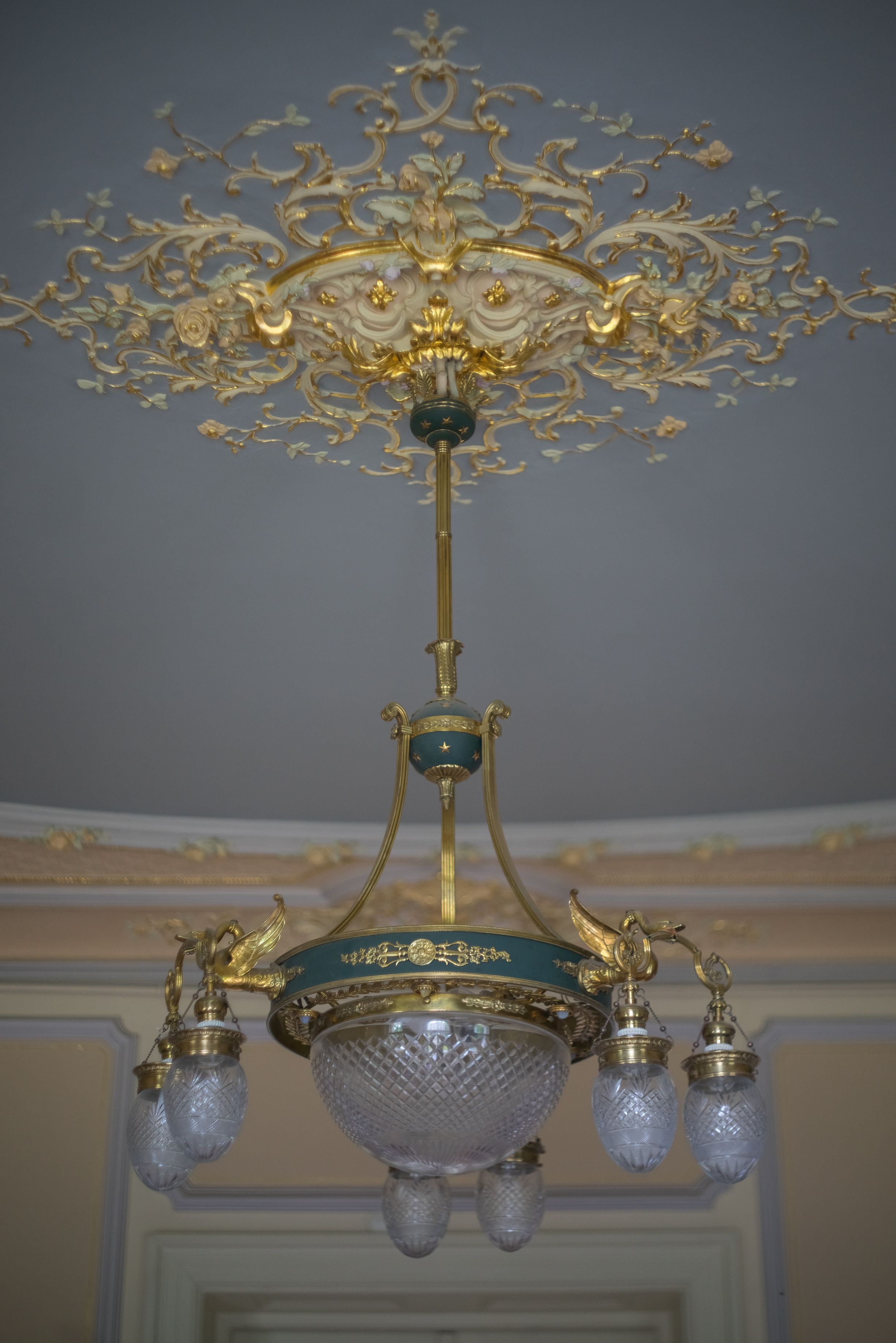 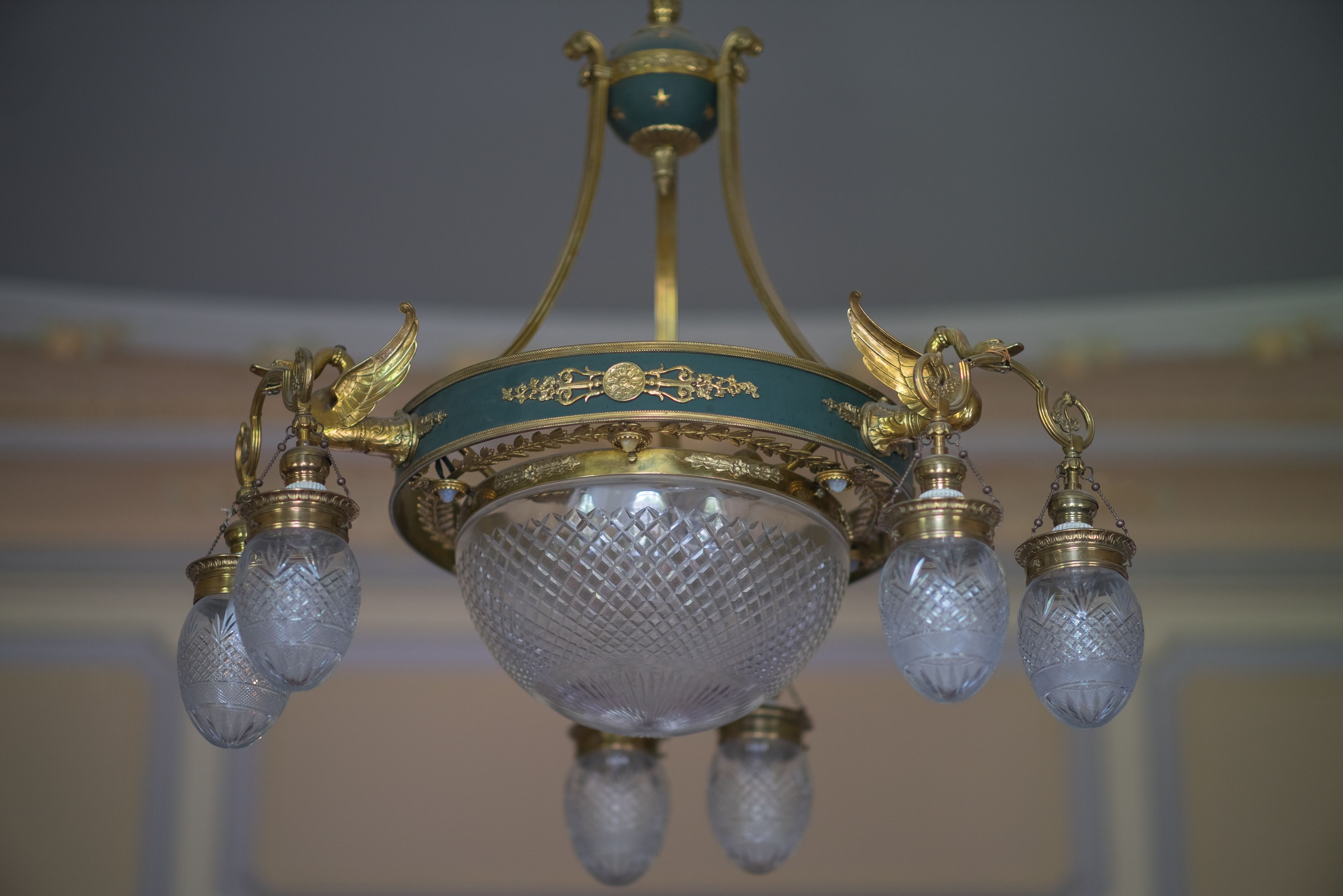 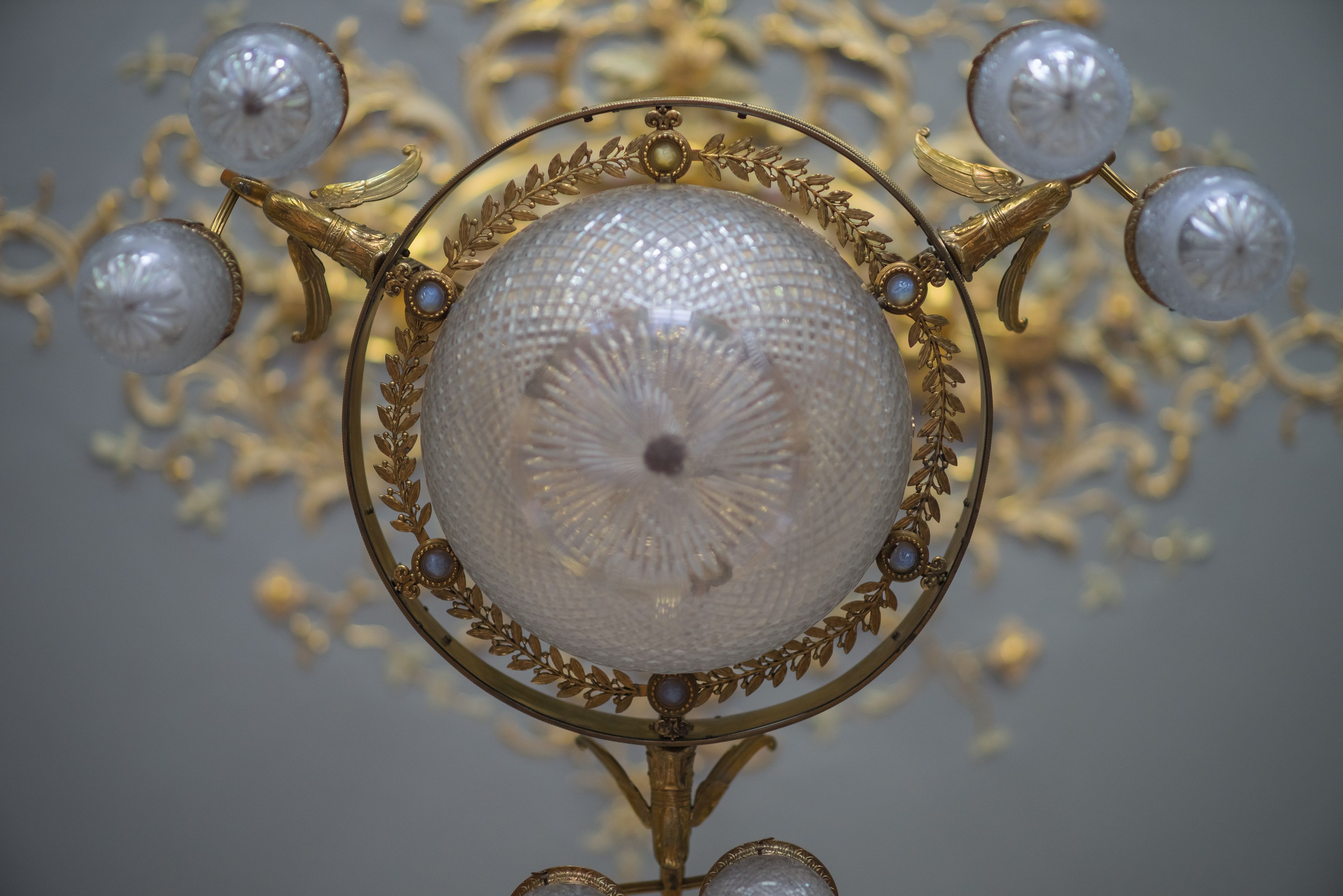 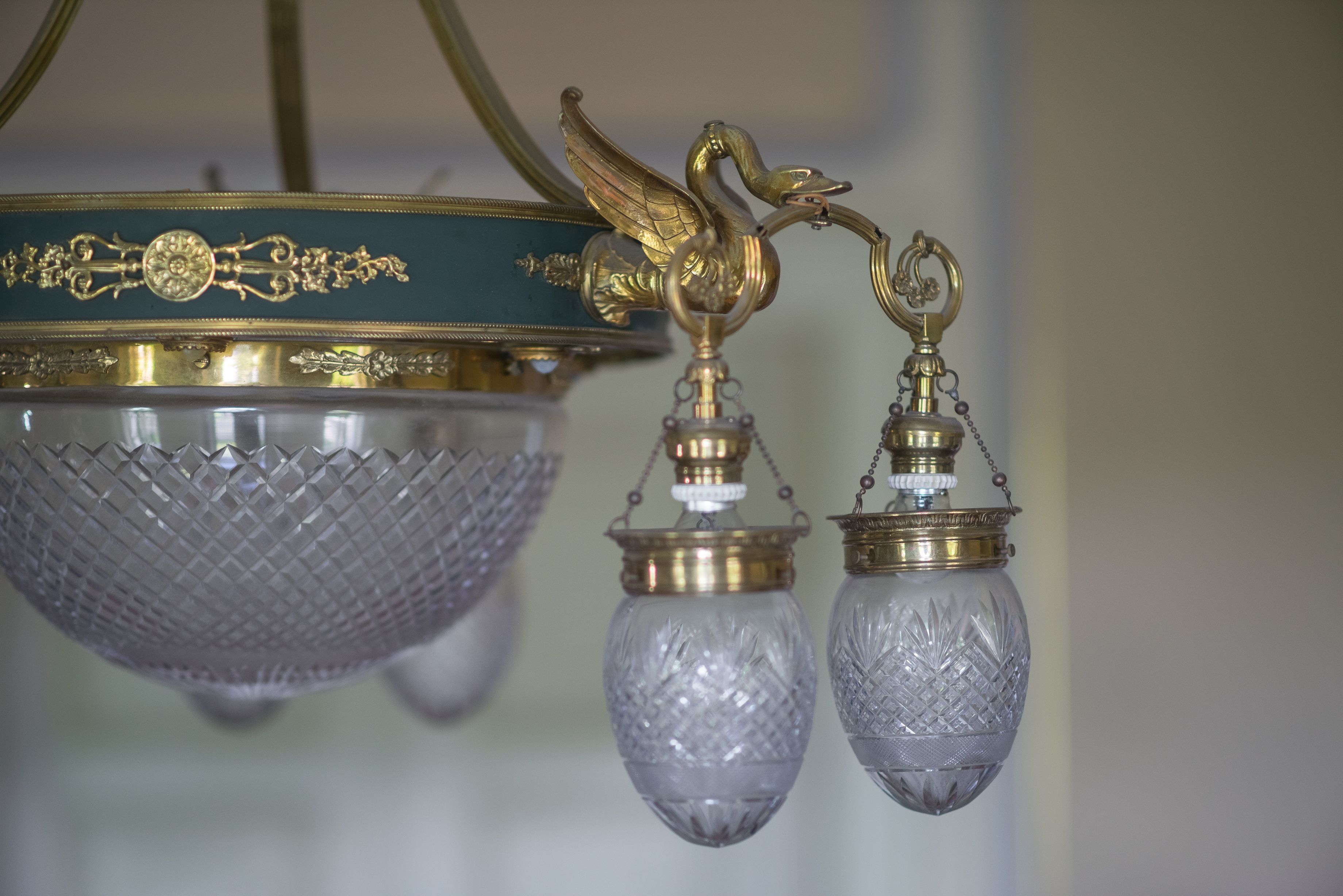 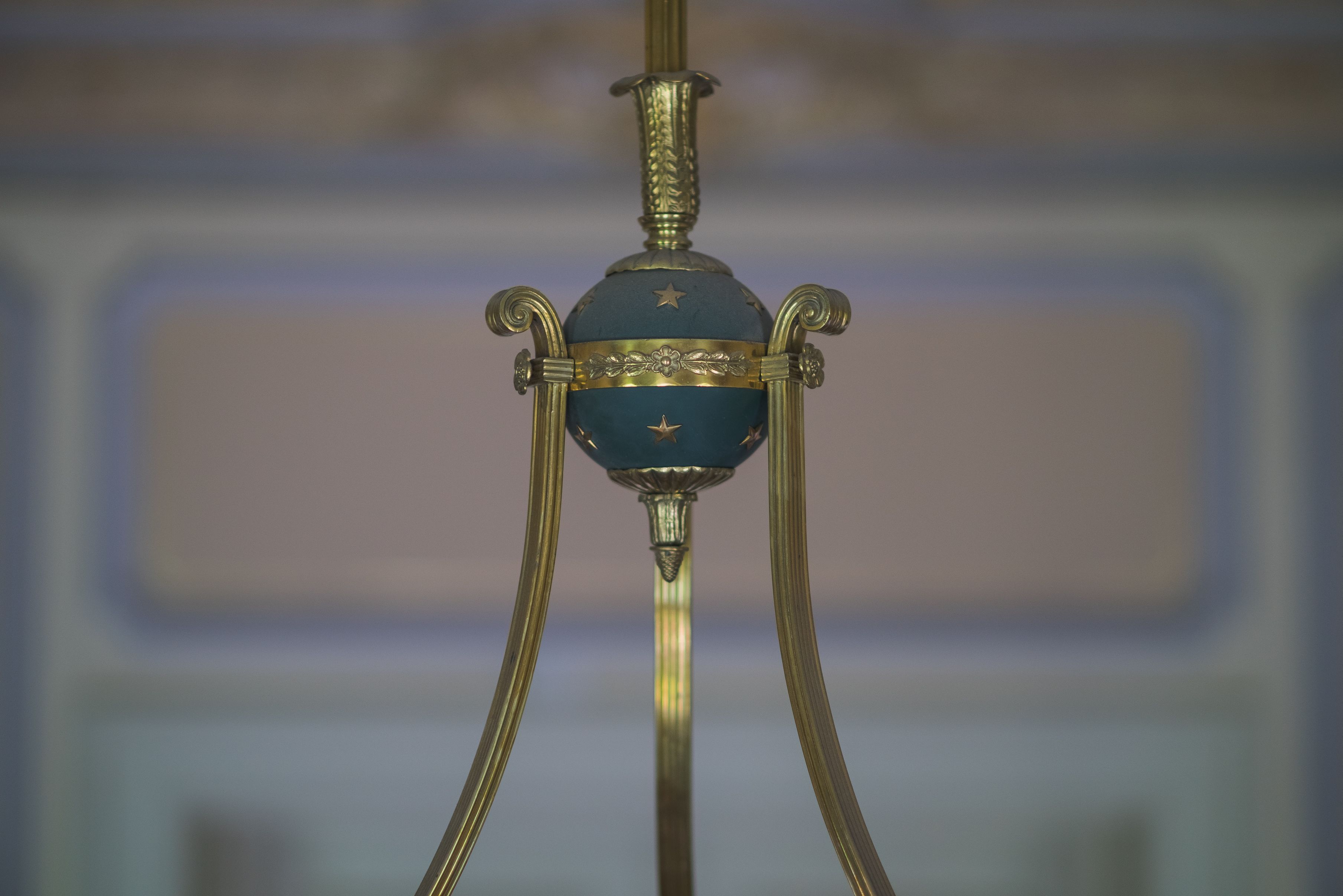 P. Vileišis Palace (the Institute of Lithuanian Literature and Folklore)

The unique code in the Cultural heritage register – 29438

Petras Vileišis, engineer and prominent figure in Lithuanian society and culture, built a palace in Antakalnis in 1904–1906. In the context of that time, the construction of the ensemble was distinguished by advanced technology. The palace was supplied with electricity, and quality electric lighting was acquired.

One of the three surviving chandeliers decorates the former sitting-room of the palace. The chandelier was made and acquired in the early 20th century (circa 1906) and is attributed to the neo-Empire style. Quality of the materials, meticulous workmanship of the details and the style of the décor suggest that the chandelier could have been made in France.

The stem-type chandelier consists of a stem, a ring with three arms and a crystal hood beneath. Metal oxidation has created the bluish-green dish-shaped rosette, the sphere beneath the stem and the ring. It is a rare colour among the survived chandeliers in Lithuania. Another chandelier of the same colour is preserved in the M.K. Čiurlionis National Museum of Art (Inv. No. Tt-1738).

Three arms of the chandelier have the form of swans with raised wings. In their beaks, they hold poles — symbolic scales with curved terminals and two cone-shaped caps for light bulbs on each of them. Like the centre hood, they are crystal and carved with a trellis pattern and palmettes. The crystal hood inside the ring surrounded by a laurel wreath with six opal glass decorations is seen looking upwards to the chandelier.

The chandelier is not overloaded with ornamentation and decorated with thoughtful and purposeful details, which adds a touch of moderate luxury and elegance to the interior of Petras Vileišis Palace. The chandelier is characterized by a harmonious synthesis of form, décor and function and is one of the highest quality imported chandeliers in Lithuania in the early 20th century.