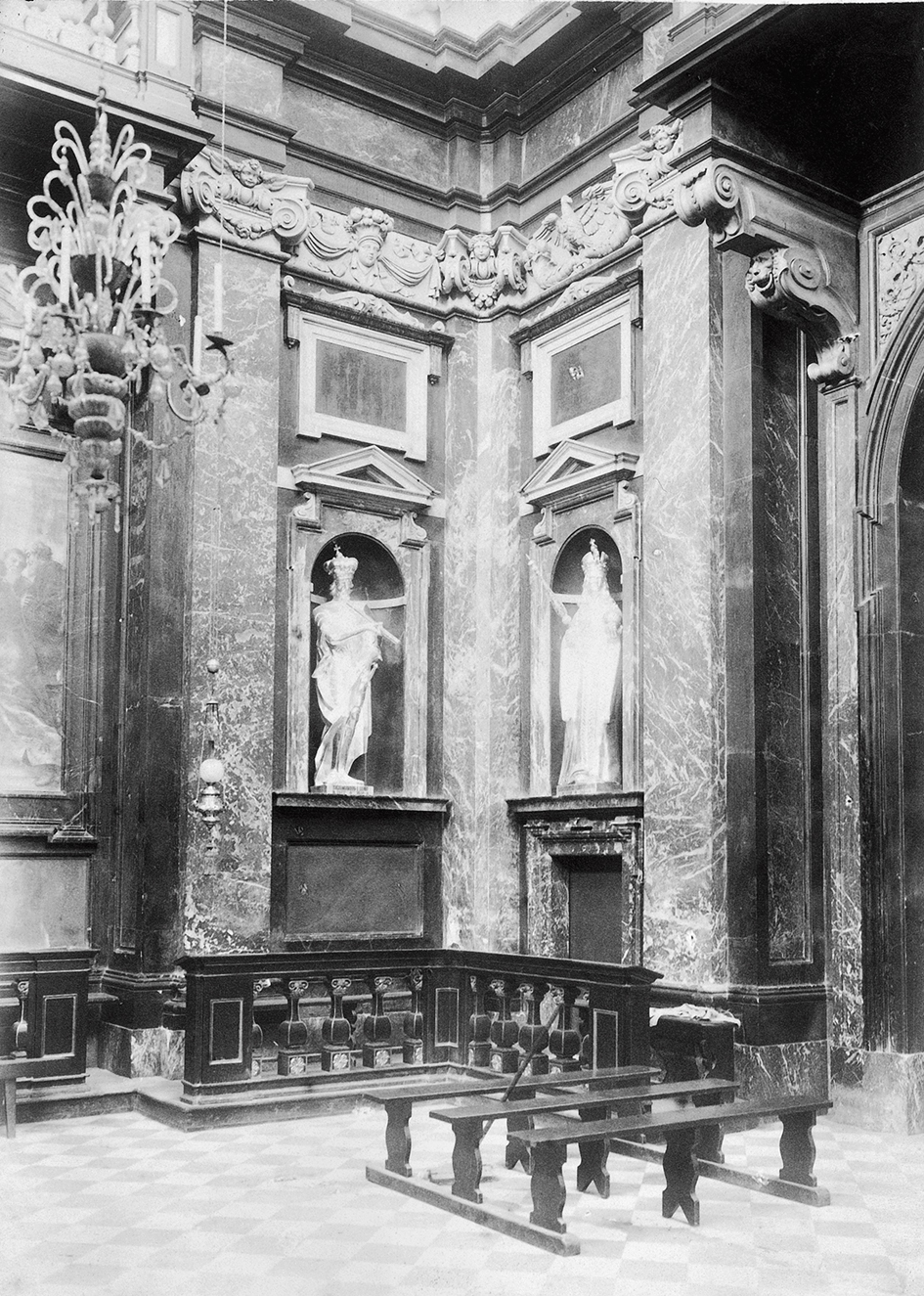 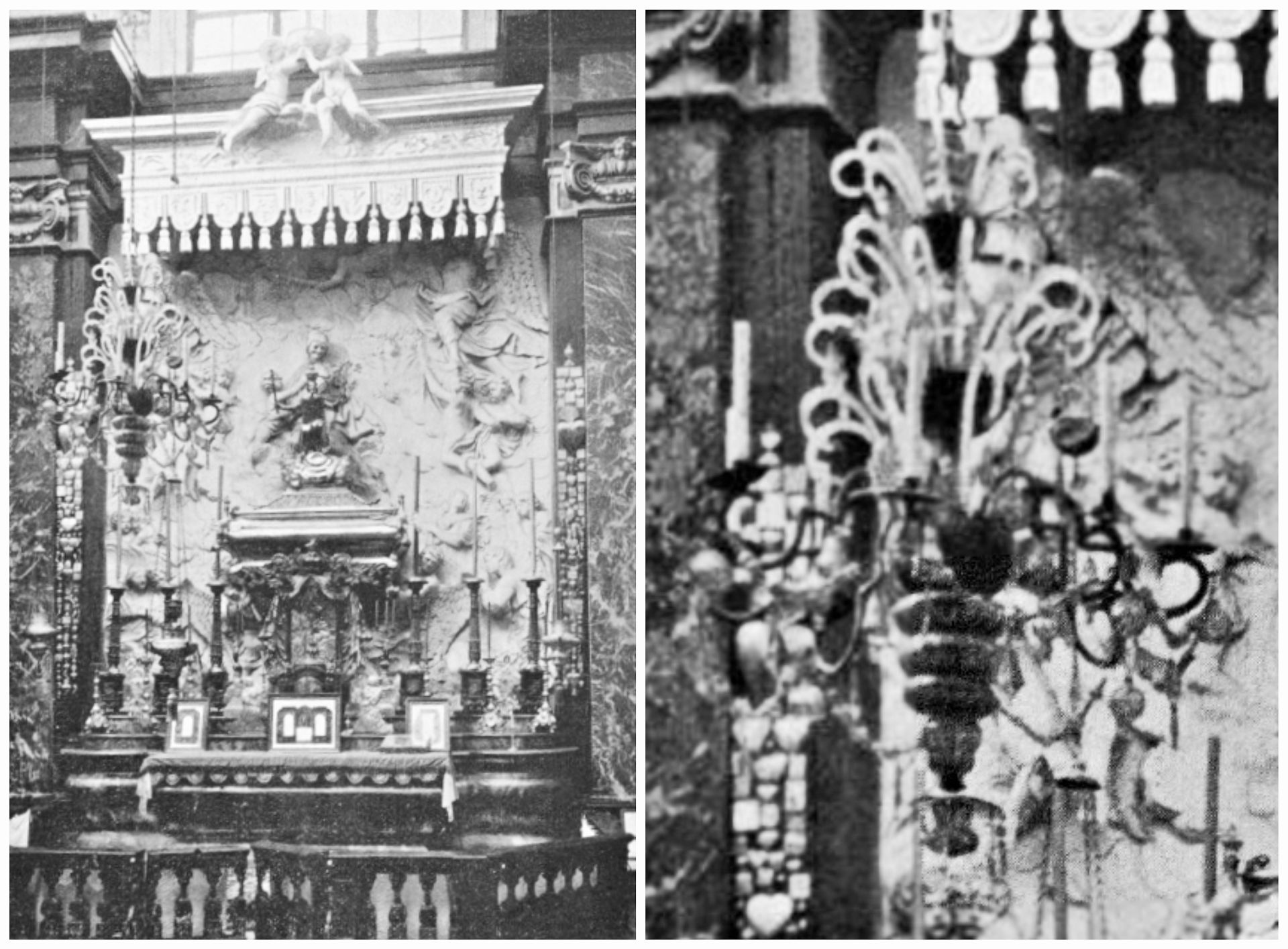 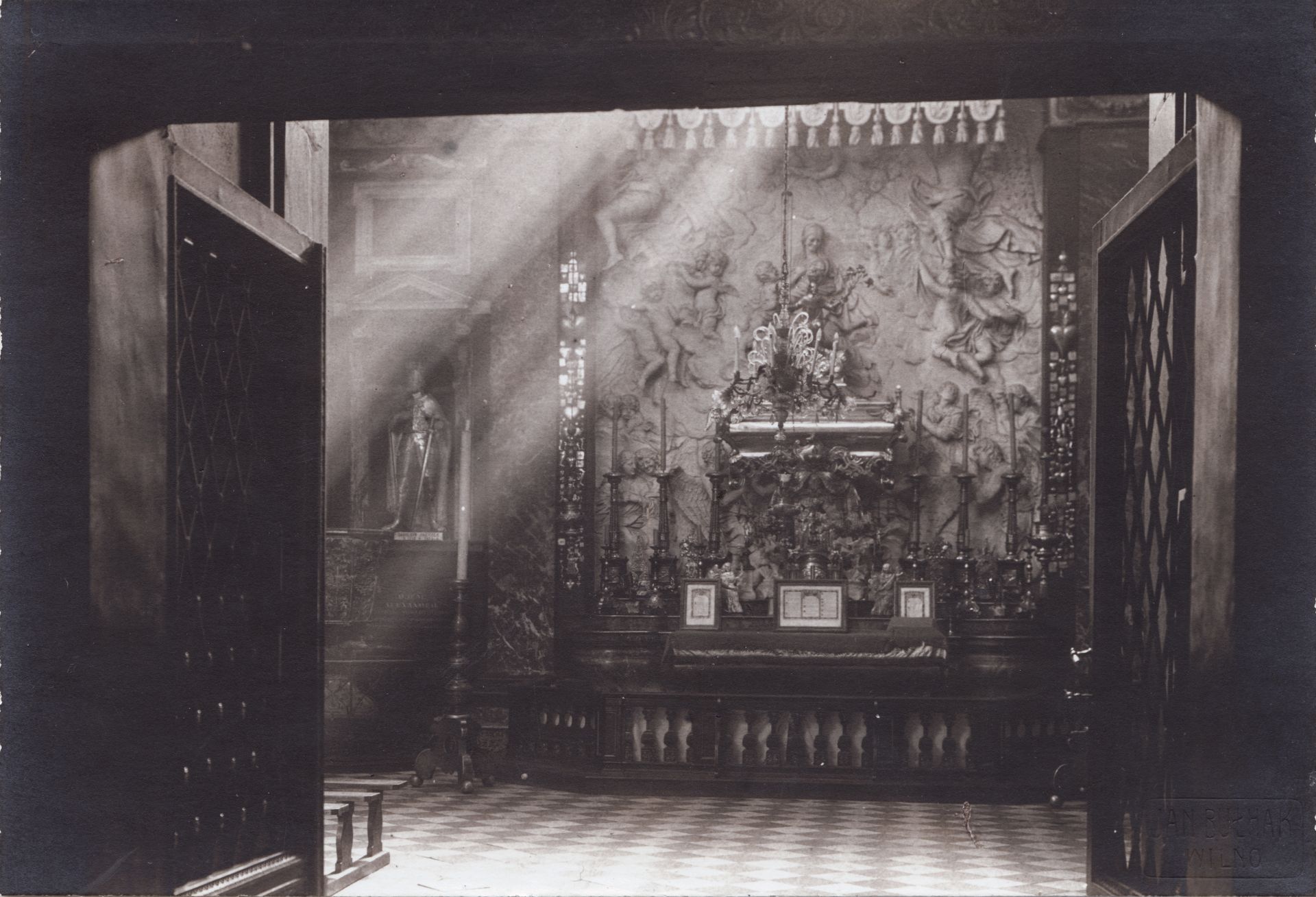 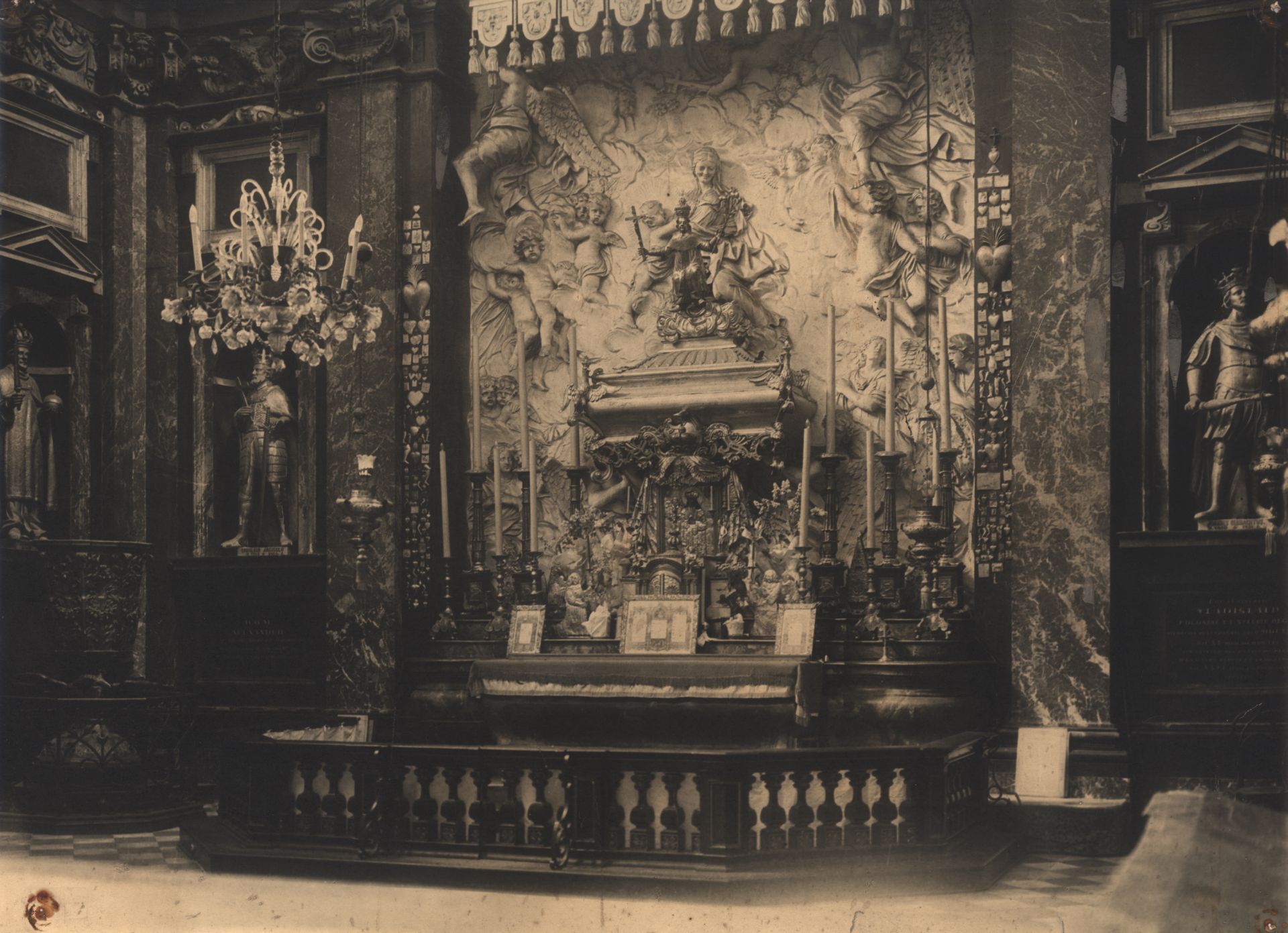 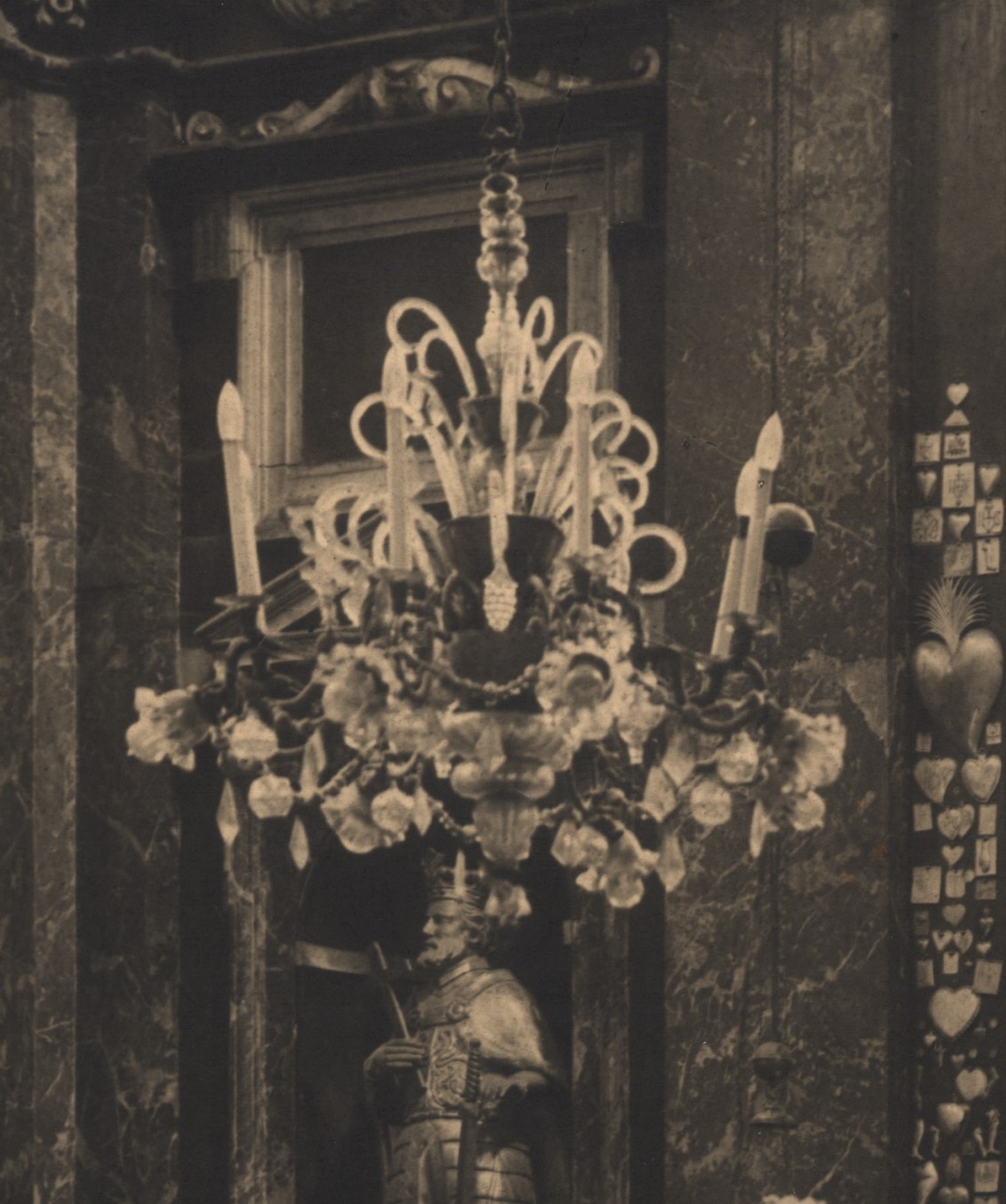 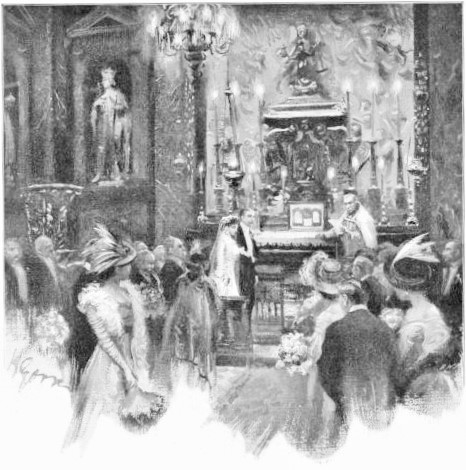 The Cathedral Basilica of Vilnius, the Chapel of Saint Casimir

The 18th century in Europe can be called the age of prosperity of glass chandeliers. From the early 18th century, chandeliers from this fragile material were made in Venice. In the first quarter of the 18th century, they were intensively produced in Bohemia, Silesia, as well as in the Grand Duchy of Lithuania [2]. Anna Katarzyna Sanguszko - Radziwiłł, the wife of the Grand Chancellor of the Grand Duchy of Lithuania, established a glass factory in Naliboki, powiat of Ashmyany in 1722 (operated until 1862).  According to art historian Alexandra J. Kasprzak, the glass factory employed masters invited from the Czechia and Silesia, making the production the best in Central European workshops [1].

Written sources reveal that the first half of the 19th century witnessed the apogee of glass and crystal chandeliers in Lithuania. In the 18th century, only wealthier Lithuanian churches having handsome benefactors were adorned with them [2]. One of the first mentions of the chandeliers made from this fragile material is found in the inventory of Vilnius Cathedral in 1712: Lichtarz krysztalowy z Sznurem czerwonym ktory wywieszy posród kosciola (Crystal sconce with a red rope hanging in the middle of the church) [3]. This chandelier is also mentioned in 1743 but has already been named as dawny, i.e., old [4].

Another inventory of the Chapel of Saint Casimir of the Cathedral of Vilnius dated to 1743 mentions Lustro Szklanne wielkie Szkła Nalibockiego alias Kryształowego z Sztukami szlifowanemi (large glass chandelier with glass or crystal from Naliboki and polished pendants) [5]. This mention is particularly valuable in the research of the glass workshops and the development of chandeliers in the Grand Duchy of Lithuania. It helps to understand that the surviving iconography documents the described chandelier.

The chandelier of the Chapel of Saint Casimir is made up of a dozen blown flattened glass beads of different size that are thread one above the other. Some may have been gilded on the inside, making them more light-reflective and ornate. Eight metal arms of the chandelier are angular in silhouette and belong to the Regency style. They are attached to the largest, probably metallic sphere in the middle of the chandelier. Two bowls are above it; a lot of transparent glass tendrils protrude from the bowls. Arms of the chandelier and some tendrils are adorned with cast glass pendants of rhombus or grape bunch shape and transparent beads of blown glass. According to Polish researchers who analysed the sources, the chandeliers made at the Naliboki workshop were also decorated with cast balls, pears, grapes or polished glass pendants.

The chandelier had been hanging in the Chapel of Saint Casimir of the Cathedral Basilica of Vilnius in the late 19th – early 20th century stands out in size. The iconography and preserved fragments of the chandeliers evidence that similar chandeliers with blown glass beads and arms were in the Catholic churches in Tryškiai and Griškabūdis and the Evangelical Lutheran Church in Rusnė. However, compared with the photographs depicting the chandelier from the Chapel of Saint Casimir, they were all significantly smaller.

It is noteworthy that the glass chandelier of the Chapel of Saint Casimir has undergone many transformations over time. The photographs by Stanisław Filibert Fleury in 1901 depict the not electrified chandelier. However, the photographs by Jan Bułhak in 1931 show the side-mounted bulb sockets with wavy-edged caps on each arm.

If preserved, this rare chandelier of the glass factory in the Grand Duchy of Lithuania would be classified as a unique value in the Lithuanian applied artworks.