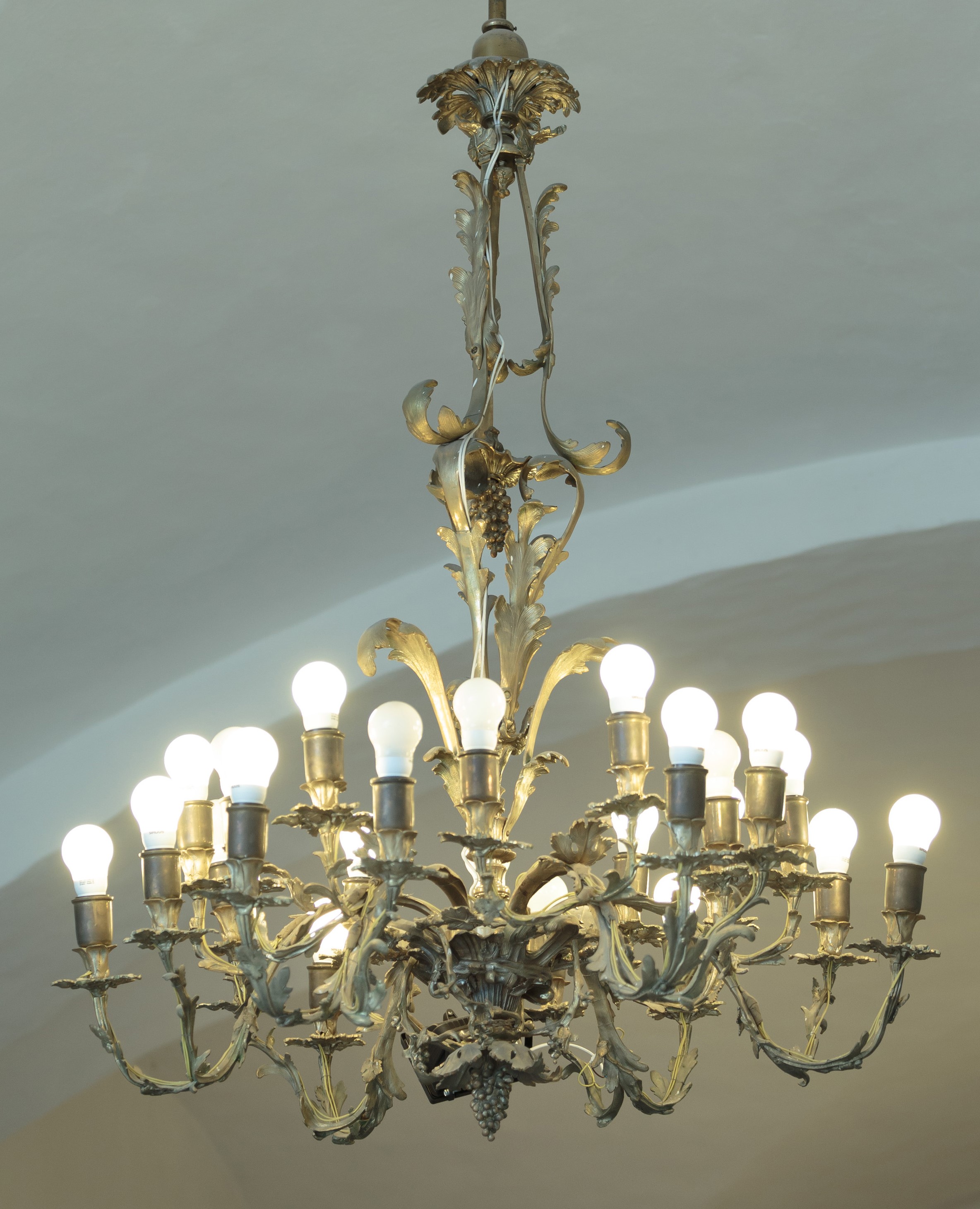 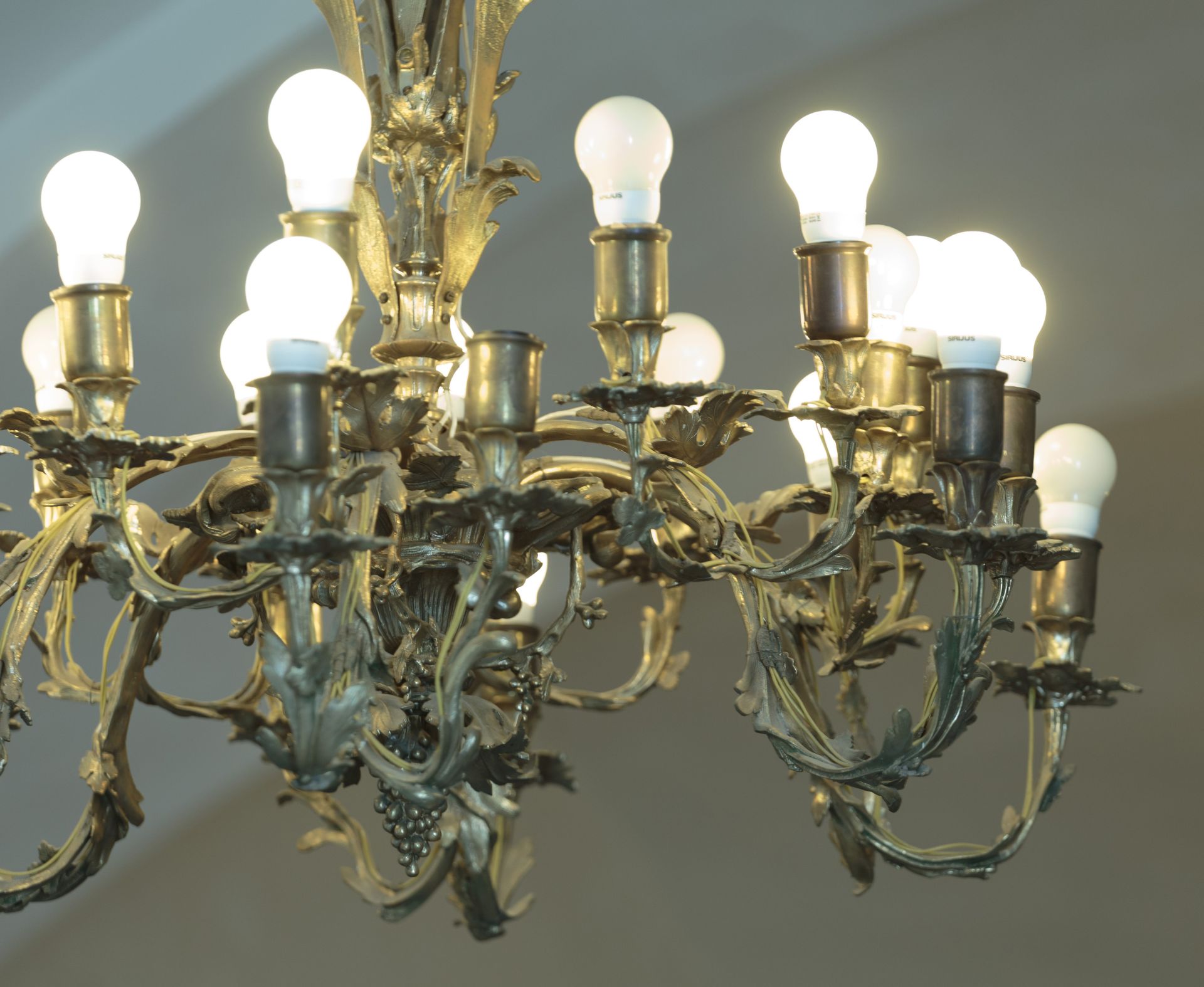 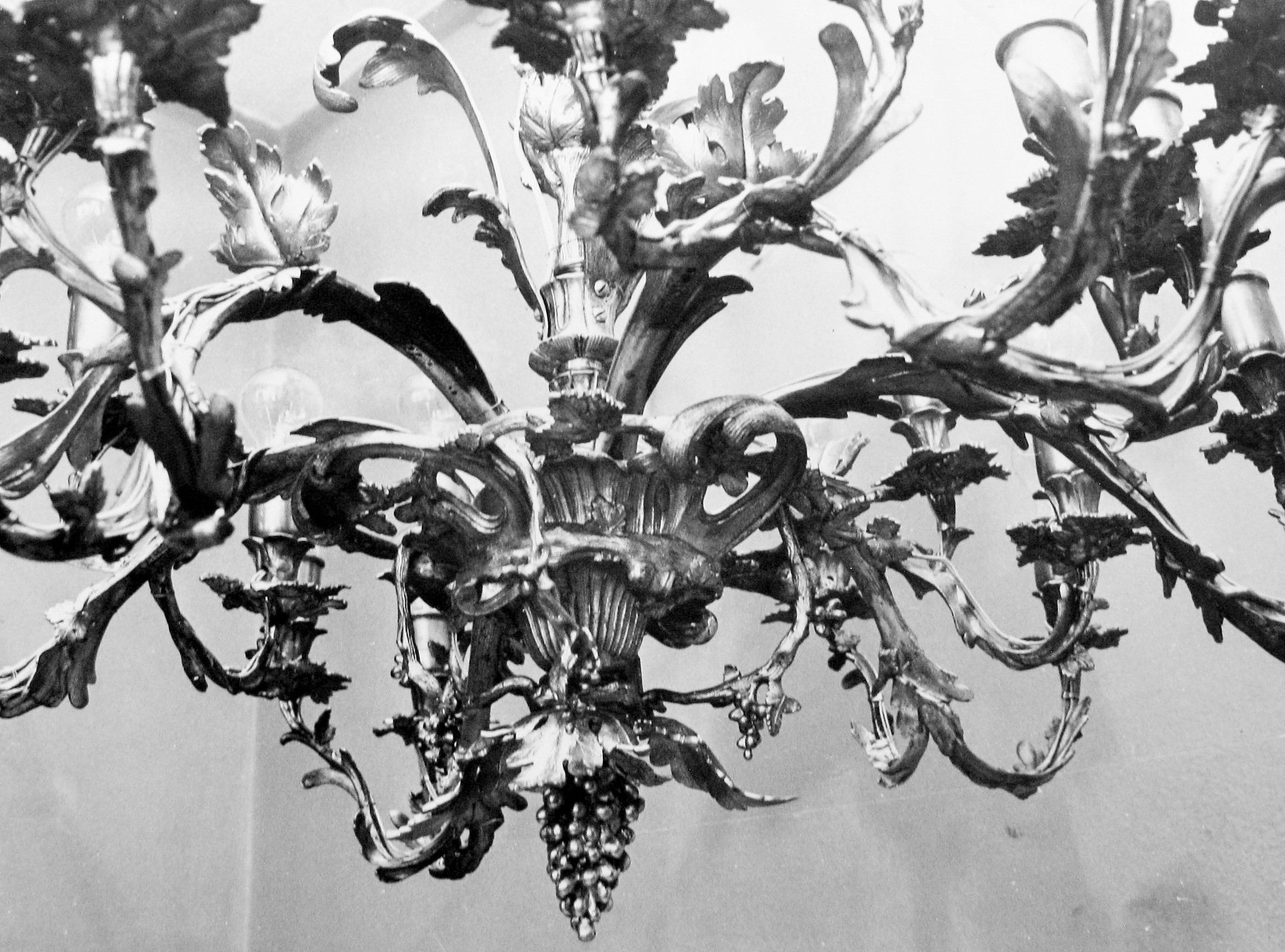 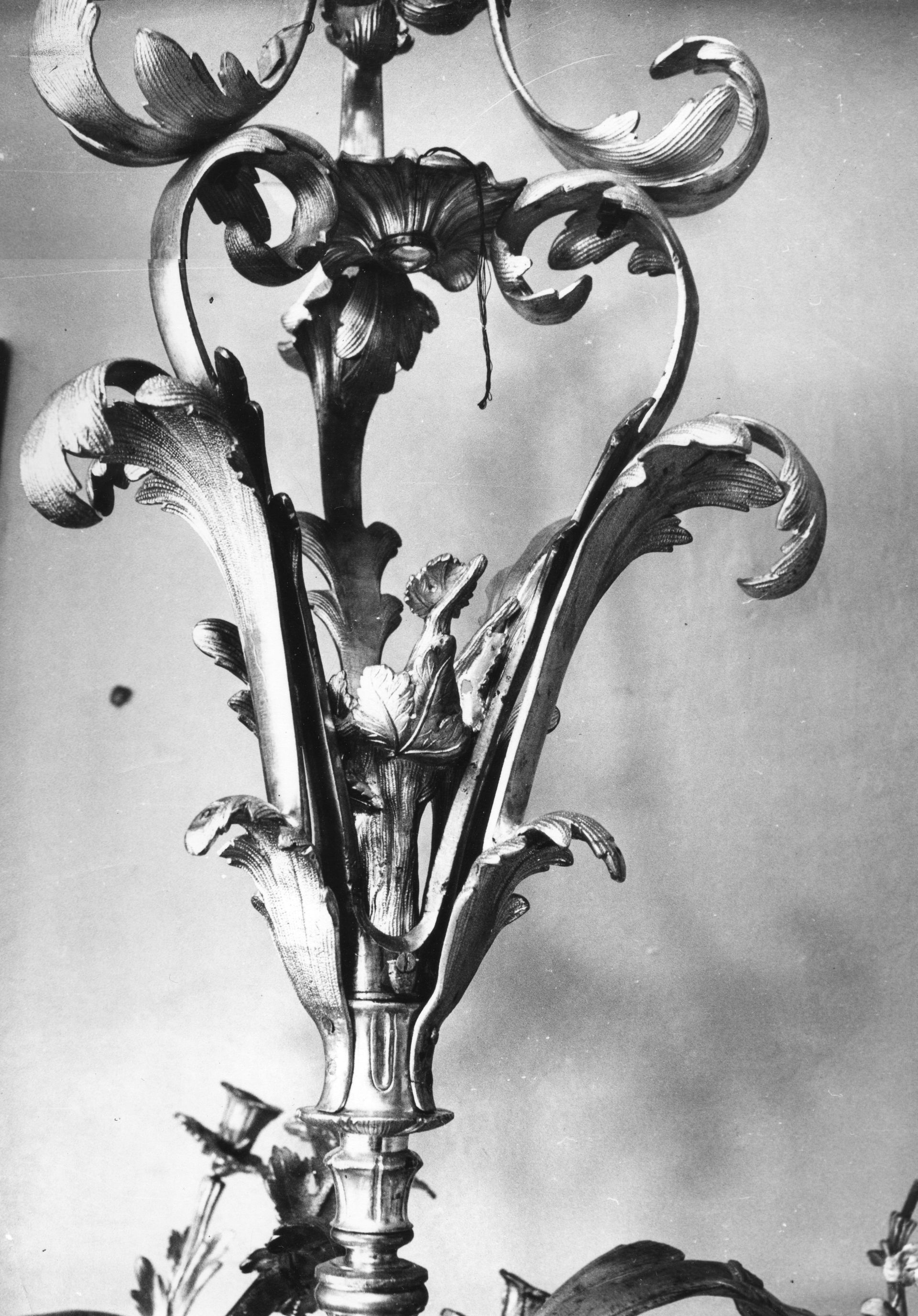 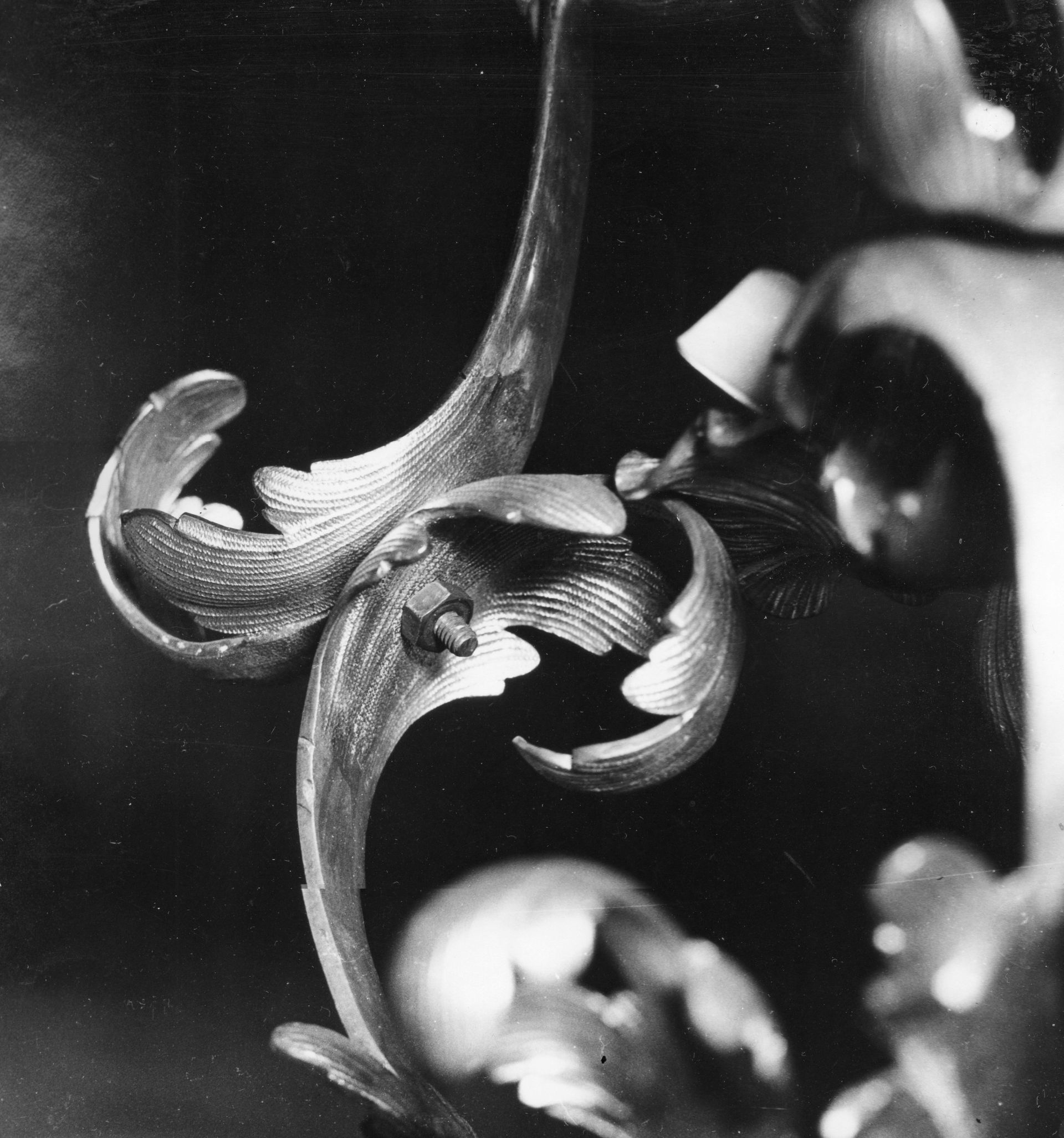 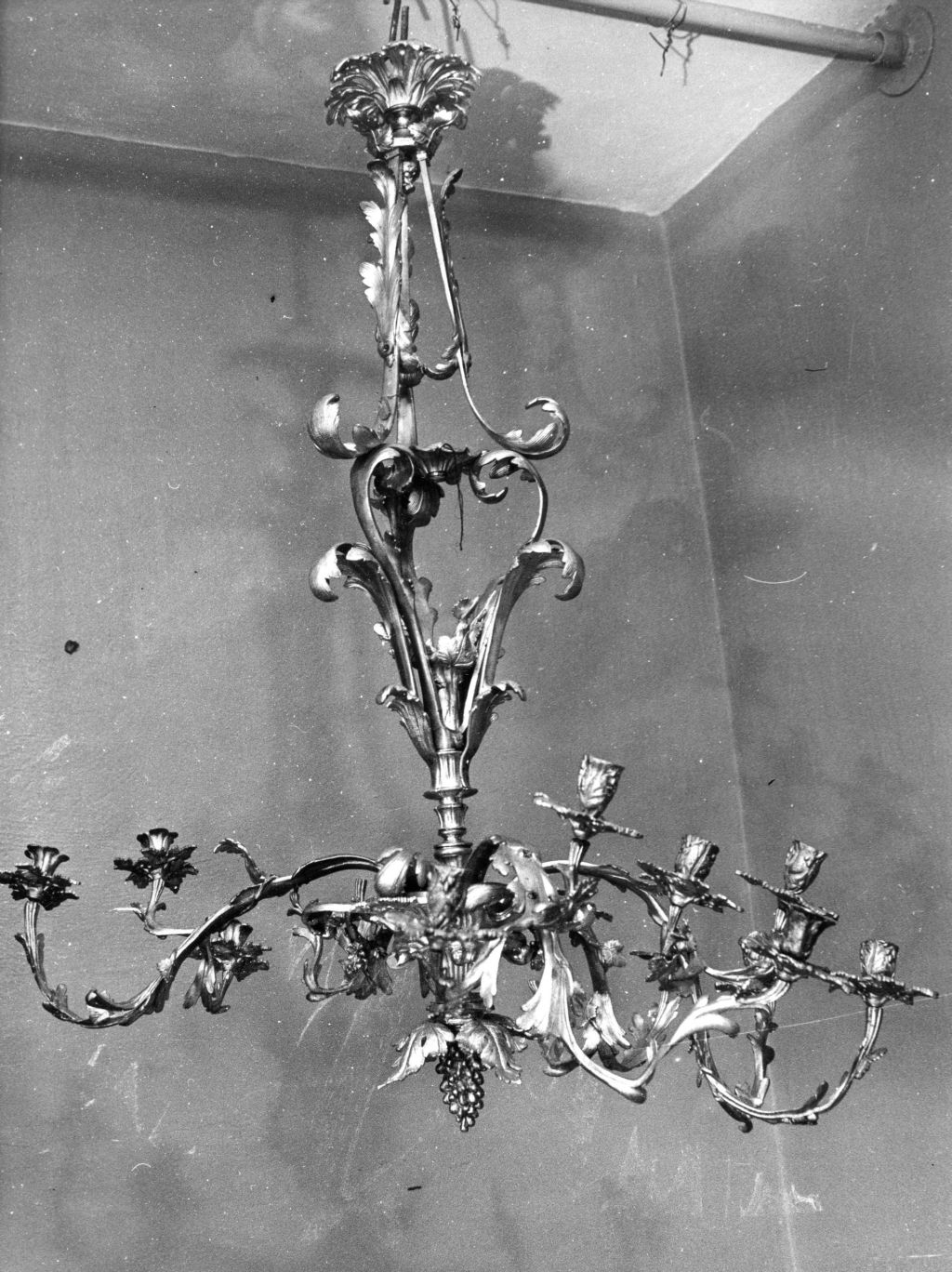 Address: Arsenalo st. 1, Vilnius (currently on exhibit at the Museum of Applied Arts and Design, Arsenalo str. 3A, Vilnius)

The motifs of gorgeous asymmetrical twigs and twisted flaming leaves have been used to decorate various wares in Western Europe since the second quarter of the 18th century and were common until the end of the third quarter of the 18th century [1]. When dating the works of applied art with the décor mentioned above, attention is important because, in the second half of the 19th century, Rococo motifs were especially favourite, so the industrial workshops produced a lot of quality derivations of Rococo chandeliers.

The chandelier of the Lithuanian National Museum and its copies decorate the exhibition halls of the Museum of Applied Art and Design. One copy of this chandelier is currently on exhibit in the Grand Salon of the Counts Tyszkiewicz Palace in Palanga. The stem-type chandelier has 24 sconces. The tracery stem consists of extra-plastic twisted leaves with a bunch of grapes in the middle. The six arms of the chandelier are placed into a vase decorated with wavy edges and curves. At the terminals, the arms branch out into four more arms. Each arm that is closer to the stem, as is typical to the old chandeliers from the 16th–18th century, was marked by a caster with a specific number of embossed dots. The twigs of an old knarred vine with small leaves and fruits are twined around the sides of the vase. The stem at the bottom terminates with a large bunch of grapes.

In 1985, Anton Mečislov Gudanec restored the chandelier in the section of the Monumental Decorative Applied Arts of the National Trust for the Restoration of Cultural Monuments [3]. The chandelier was cleaned; a missing arm with four branches was cast and fitted. The photos before the restoration show that the chandelier had two types of sconces: flap-style that resembles flower blossoms and with thicker walls and embossed motifs of leaves and berries on the sides. During the restoration, they were removed and replaced with newly-cast sconces, resembling flower blossoms. The chandelier is electrified mounting additional bulb sockets on the sconces for candles. They are large, rough and visibly uglify the chandelier. Probably because of this, Ona Mažeikienė, head of the department of the Lithuanian SSR History and Ethnography Museum (at present, the National Museum of Lithuania), demanded to dismantle the electric wiring (wires and sockets) that were mounted during the restoration and to return the remaining original sconces. As seen from the current image of the chandelier, the sockets with light bulbs are still in place and still function.

The technique of performance, purity of the ornamentation, lightness and the whole composition make it possible to classify the ware to the Rococo style that prevailed in the third quarter of the 18th century. It is not known precisely, but the chandelier probably entered the museum from an unknown, perished Lithuanian manor. The ware is undoubtedly one of the most valuable chandeliers survived in Lithuania.