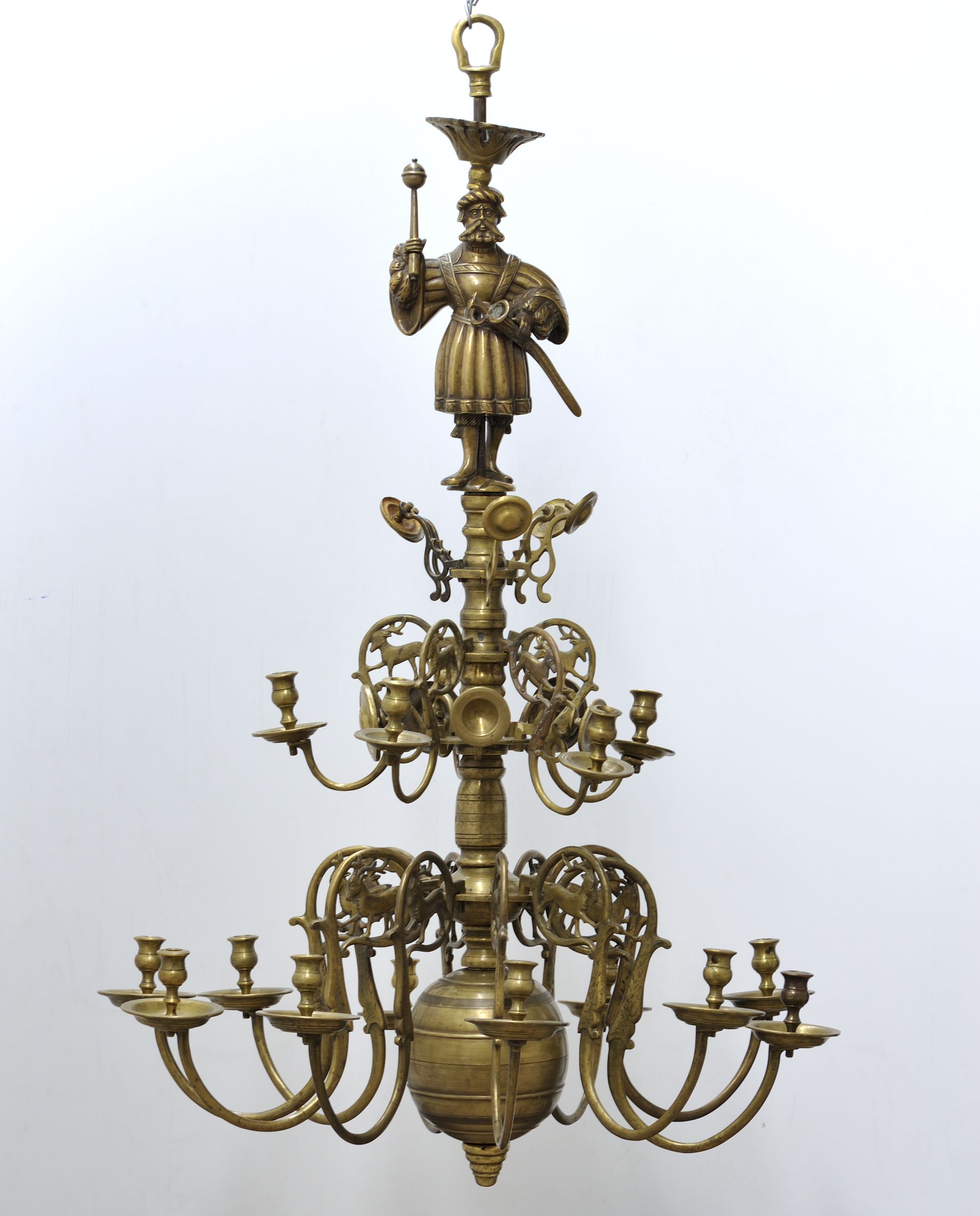 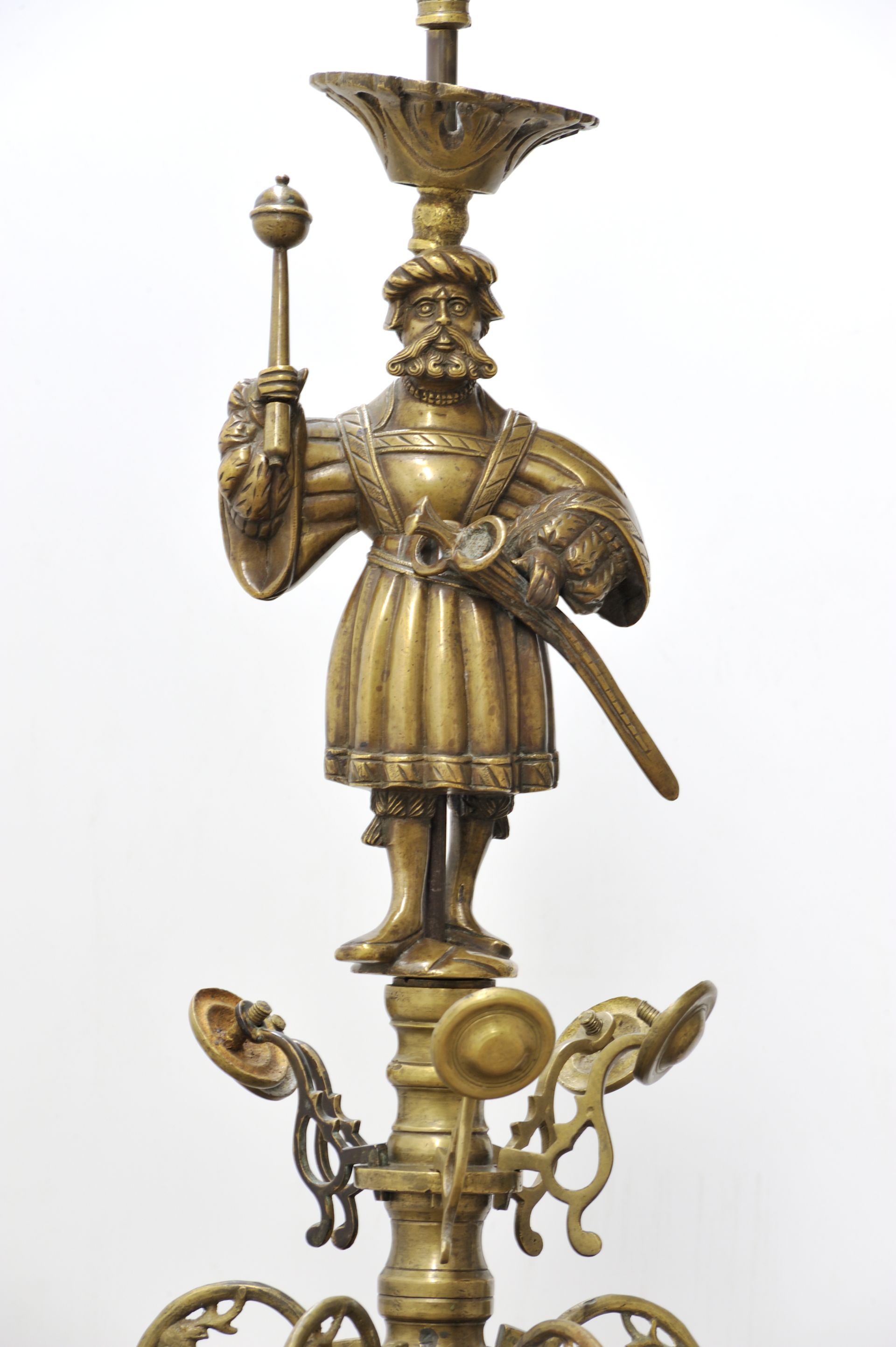 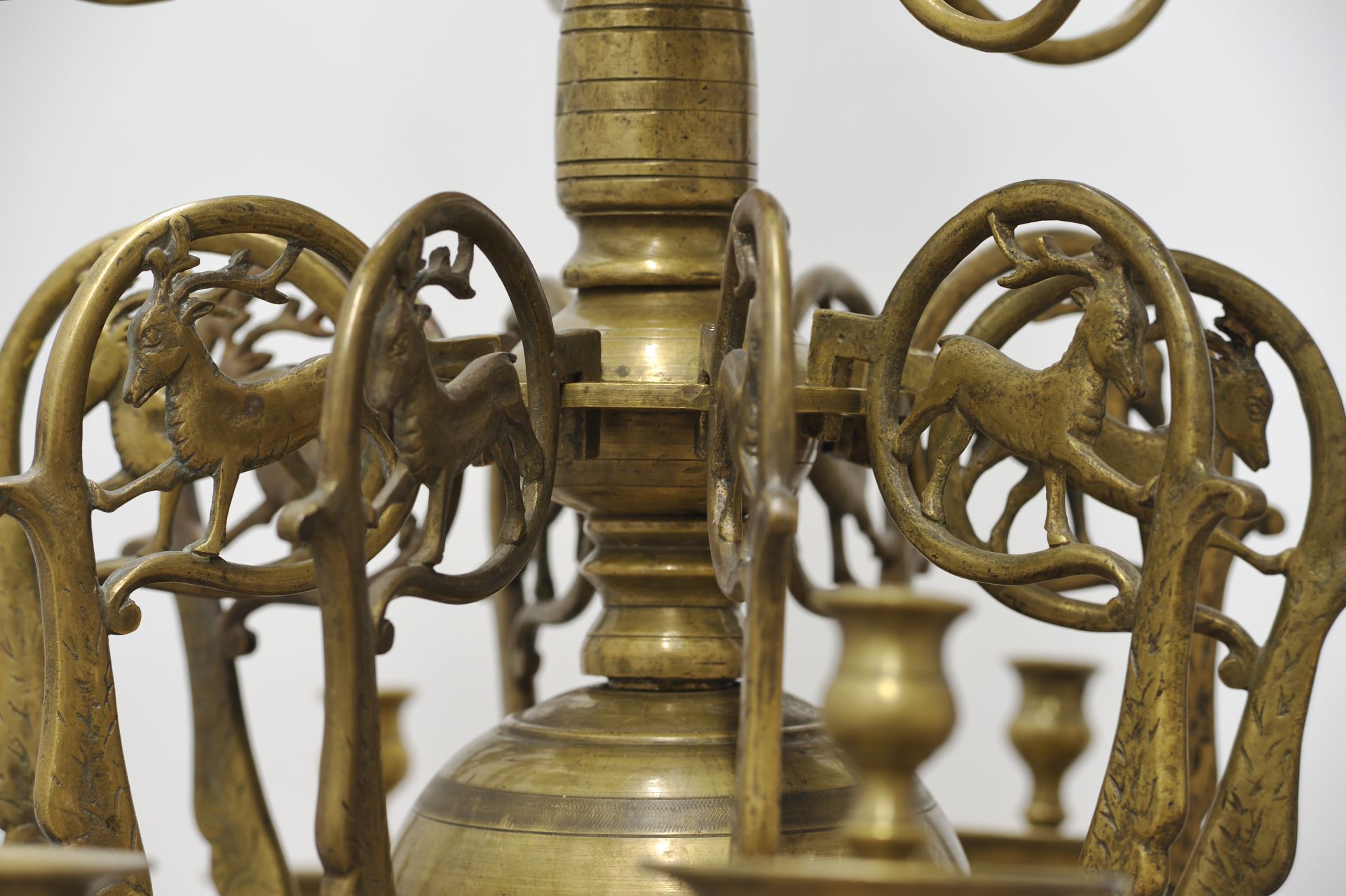 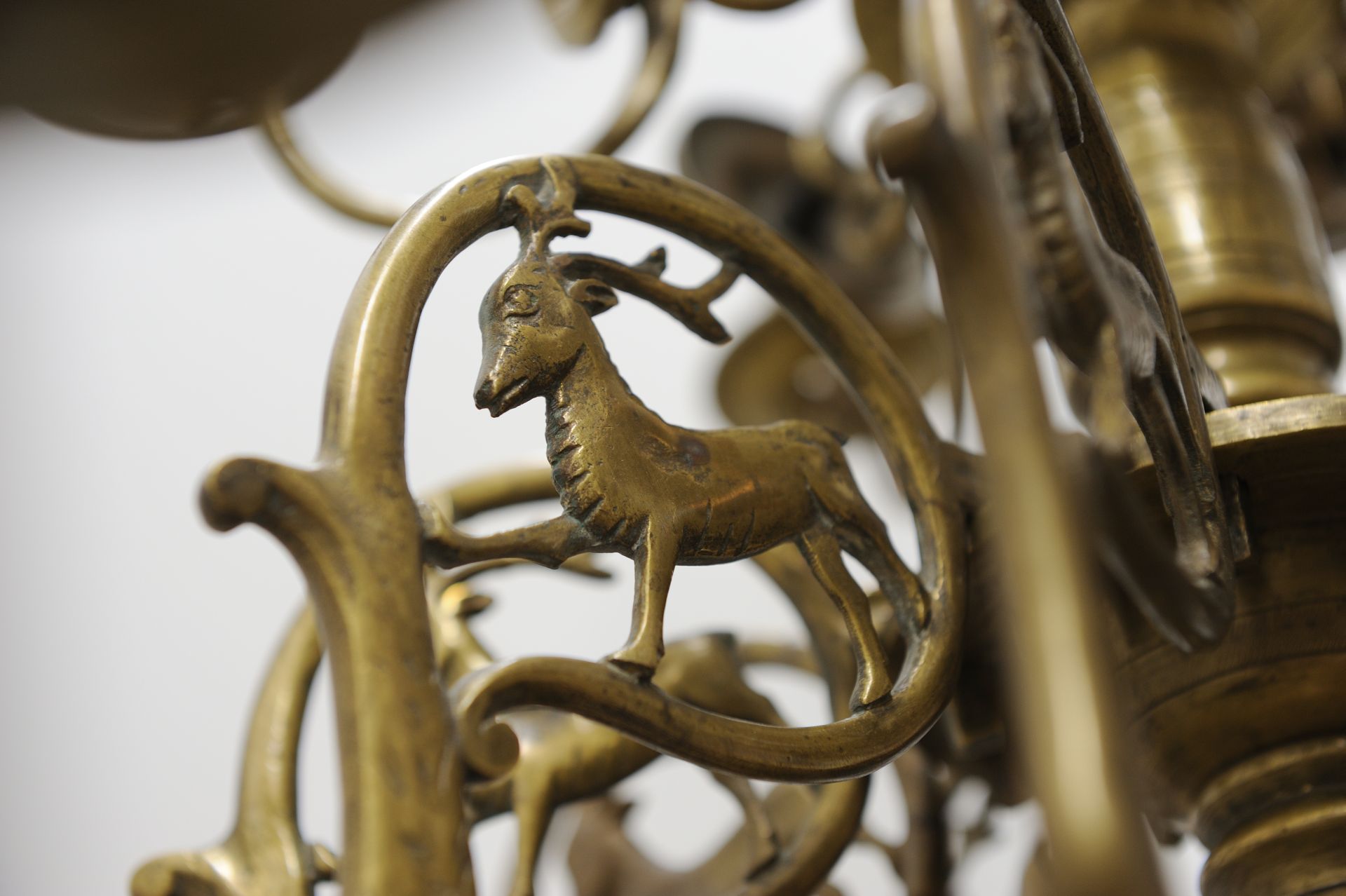 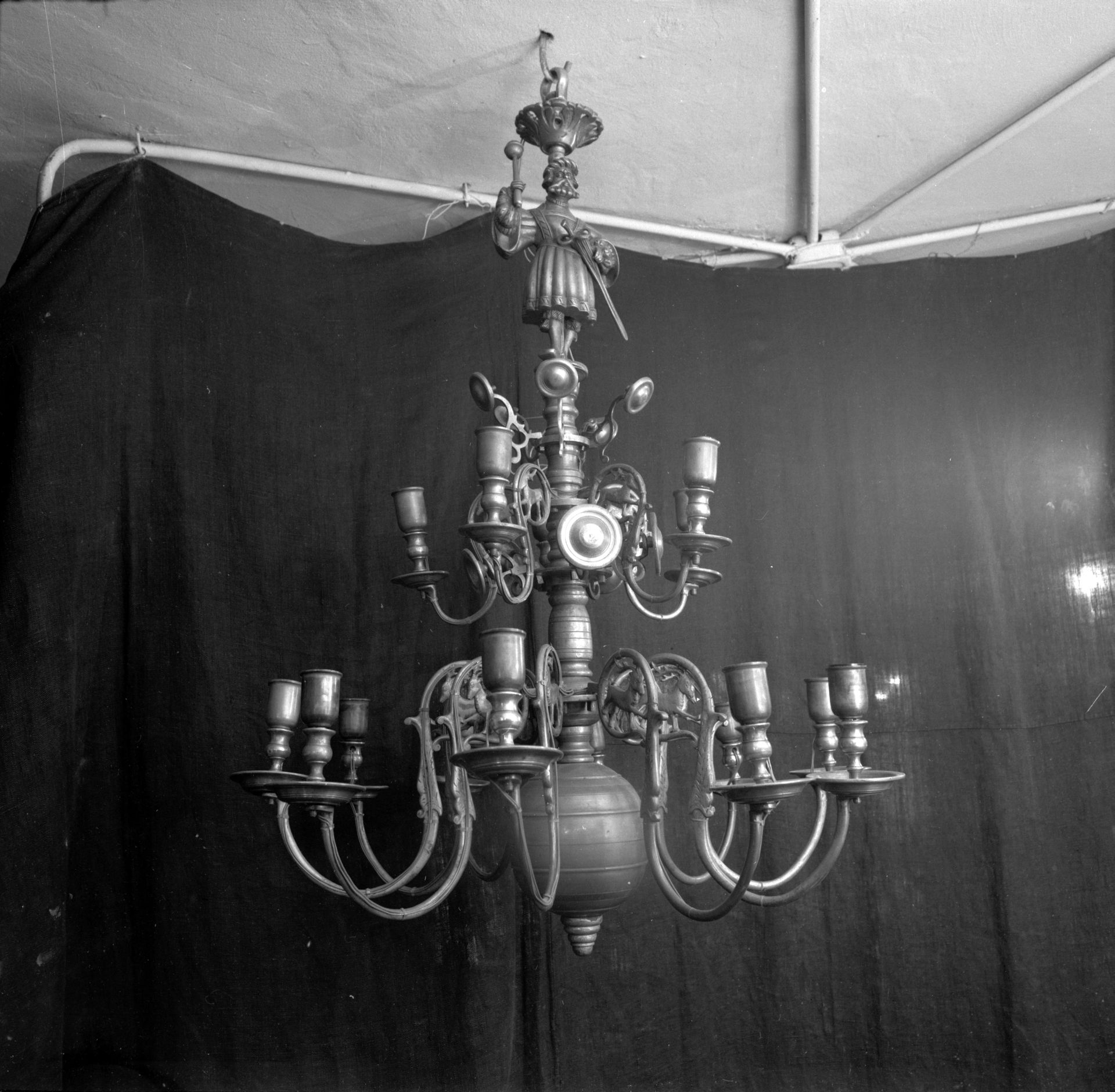 The unique code in the Cultural heritage register – 38184

The brass chandelier with the male sculpture is one of the most famous and valuable in Lithuania. However, it was not comprehensively investigated during recent decades. The dating of the object in different sources varied. According to the Lithuanian Soviet Encyclopaedia in 1983, it is dated to the late 16th century [2]. However, the restoration passport dates it to the 18th century [1].

It is a stem-type chandelier. At the top of the stem is a roughly cast tracery funnel-shaped rosette and beneath a warrior sculpture. Depicted man with a sword and a solemnly raised mace in his hand is a representative of the nobility. Its clothing is typical of the 1510s–1520s. The main dress, called waffenrock, with wide decorative sleeves, large square neckline and pleated skirt with striped edges. Densely frilled shirts in the chin were also fashionable in the 1st half of the 16th century. The head is covered with a beret with a flap at the sides. Under the waffenrock, trousers reaching knees are seen [3]. Footwear is a light, open-toed clogs with a broad and blunt forepart, which is called Kuhmaulschuh in German (literally cow’s muzzle shoes). According to written sources, courtiers of the Palace of the Grand Dukes in Lithuania were dressed in waffenrock in the first half of the 16th century. In the second half of the 16th century, waffenrock was used by the noblemen living in more remote areas of the GDL. Berets were less frequently worn in Lithuania, and lightweight clogs were only worn by closer related to the ruler’s palace due to the harsh climate in Lithuania [3]. However, based on the works of the German Renaissance painters, it can be stated that most likely the statue depicts a Landsknecht, mercenary German infantryman of the first half of the sixteenth century. The figure differs from other parts of the chandeliers not only in the metal colour but also in the quality of the performance. Likely, it was cast by skilled masters in the first half of the 16th century and was little later adapted to the chandelier in the Archdiocese of Vilnius.

Profiled tubes and four drilled discs to receive arms and reflectors are alternately threaded of the chandelier’s stem. The stem beneath, as in Baroque chandeliers, terminates with a large sphere. The sphere not only performed a decorative function but also reflected the candlelight. All stem parts, including the sphere, are slightly decorated with carved strips of different widths. Reflectors and arms form a downwardly spreading silhouette of the chandelier. Five small reflectors are mounted on the top. To better reflect light, they are angled and reflect the light from the top five candles. Five larger reflectors mounted on the third disc from above intensify the light from ten lower candles.

All arms of the chandelier have the same decoration but differ in size: the five upper ones are smaller; the ten lower ones are larger. All of them are heavily curved S-form and sharply bent down. The arms of such a silhouette began to be produced in the late 16th century (specific dated examples are known in Gdańsk and Riga) and were popular throughout the Baroque period. Fawns are depicted in the arm twists of the chandelier. With the right front leg, they trap the tail of the fish that mouse up the chandelier's arm. The fish motif is often found among chandeliers in the Central European region made in the second half of the 16th – 17th century.

The chandelier was transferred to the Lithuanian Art Museum from the Cathedral of Vilnius. In 2014, it was returned to the Archdiocese of Vilnius [4]. The mentions of the chandelier have not been found so far in the Cathedral inventories. Copies of this decorative and valuable chandelier adorn the halls of the Palace of the Grand Dukes of Lithuania.