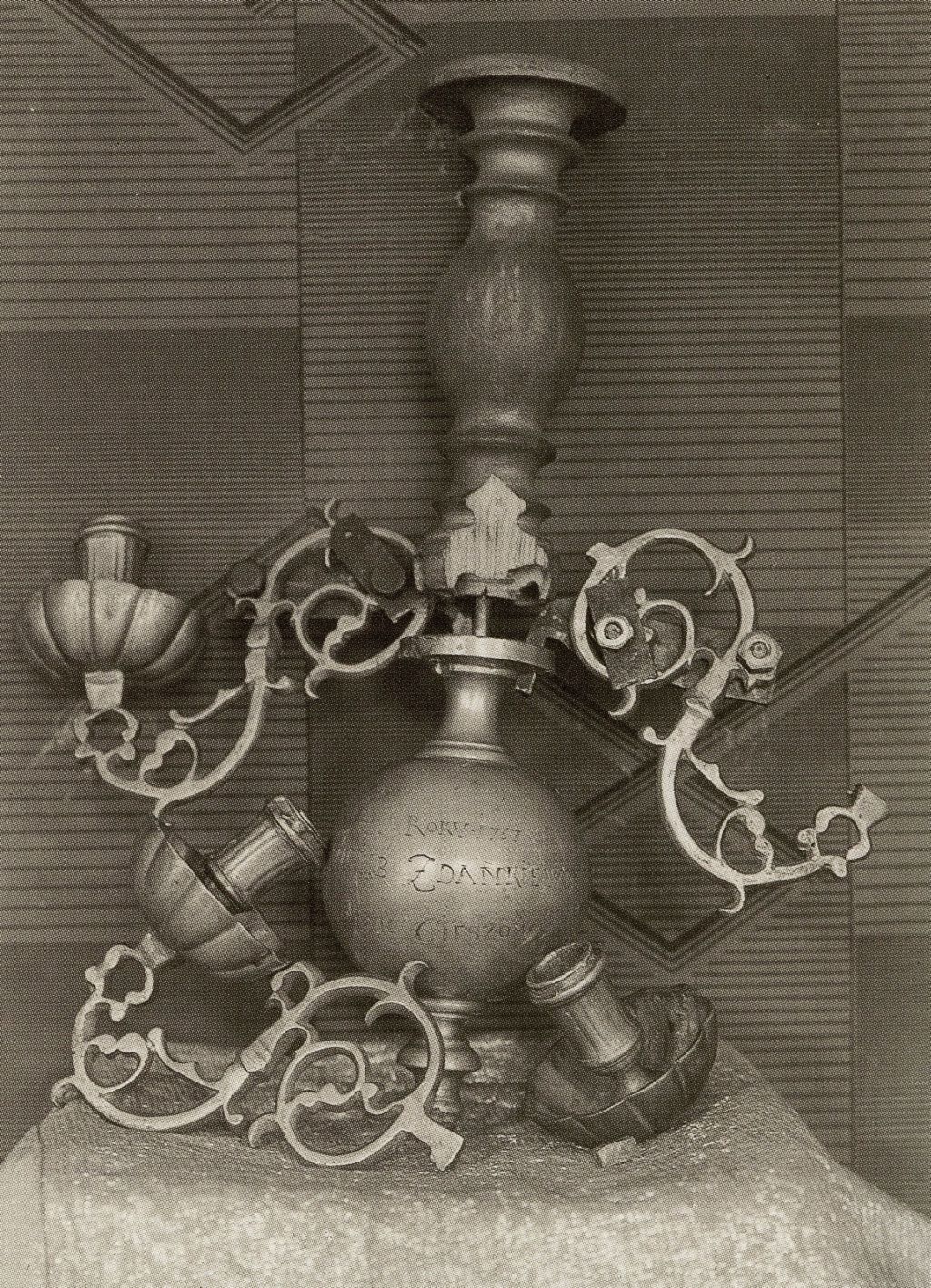 Jan Bułhak (1876–1950), the most famous photographer in Vilnius of the first half of the 20th century, captured in the photographs not only the important spaces or personalities of the city but also artefacts that reflect the everyday life of the townspeople. In the photography book of Jan Bułhak Events and People. Surroundings published by the National Museum of Lithuania, an image of the metal chandelier of a late Baroque is published that once belonged to the Vilnius butcher’s workshop and had fallen into separate parts.

As is typical in the 17th–18th centuries, the photograph shows a hanging stem-type chandelier, also known as the Dutch or spider type, with a sphere beneath. Deep and chubby drip pans to catch falling wax are divided into slices and resemble shells. Drip pans of various shell-forms have been found on the chandeliers in Europe since the first half of the 17th century [2]. The remaining three arms are S-shaped and decorated with gorgeous leaves creating the dynamic image. The plastic of the article allows it to date to the third quarter of the 18th century when the Rococo style predominated, which is often described as the expression of the late Baroque. The date embossed on the chandelier’s sphere with a partially visible inscription in Polish also confirms the assumption: „Roku·1757 // <...> ƵDANKIEW <...> // Cirszo“.

A lot of similar chandeliers were produced and survived in Gdańsk (present-day Poland). One such example decorates a parish church of the Jegłownik village (north-eastern Poland), which is not far away from the production centre [4]. Known examples suggest that the discussed chandelier was imported from Gdańsk.

The sources do not justify, but it is possible to hypothesize that the chandelier may have been hanging in the Franciscan church of the Assumption of the Blessed Virgin Mary in front of the altar of the Immaculate Conception of the Virgin Mary, which has long been cared for by members of the butcher’s workshop. Auksė Kaladžinskaitė-Vičkienė writes that in the 17th–18th centuries, not only noblemen and clergy became patrons of churches and monasteries but also wealthy citizens and town organizations — guilds and fraternities. Each guild competed for the ornateness and richness of the altar to reveal the „degree“ of the devotion of its members [3]. Vilnius Christian butcher’s guild has existed for three centuries, and according to the established tradition, the altar was still patronized by them in the 19th century. Noticeably broken and disused chandelier in the first half of the 20th century did not go unnoticed by a careful photographer.

As the examples show, similar chandeliers have survived in foreign countries. However, in the context of Lithuanian hanging lighting, this work is a rare example of artistic, historical and typological value.