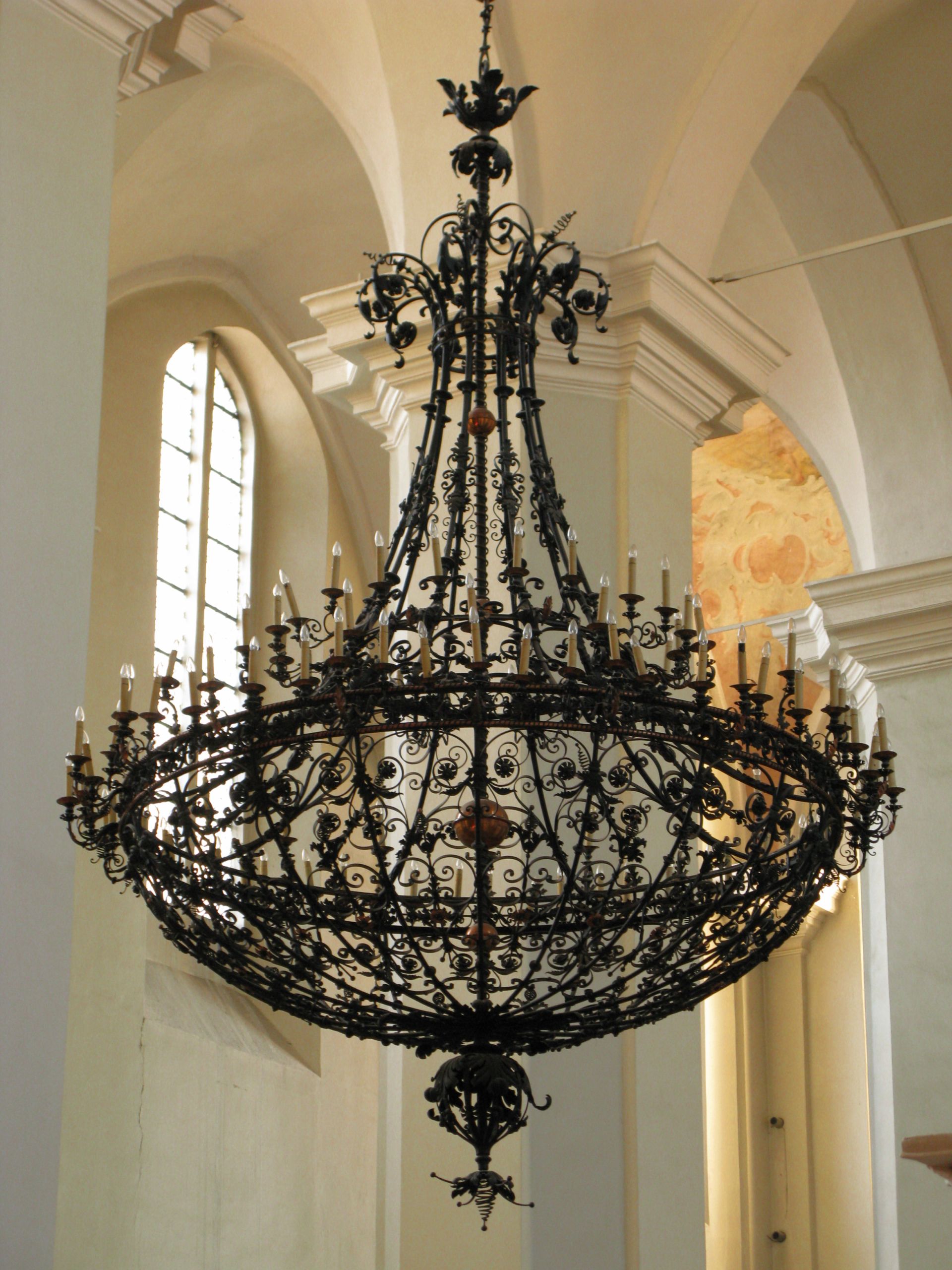 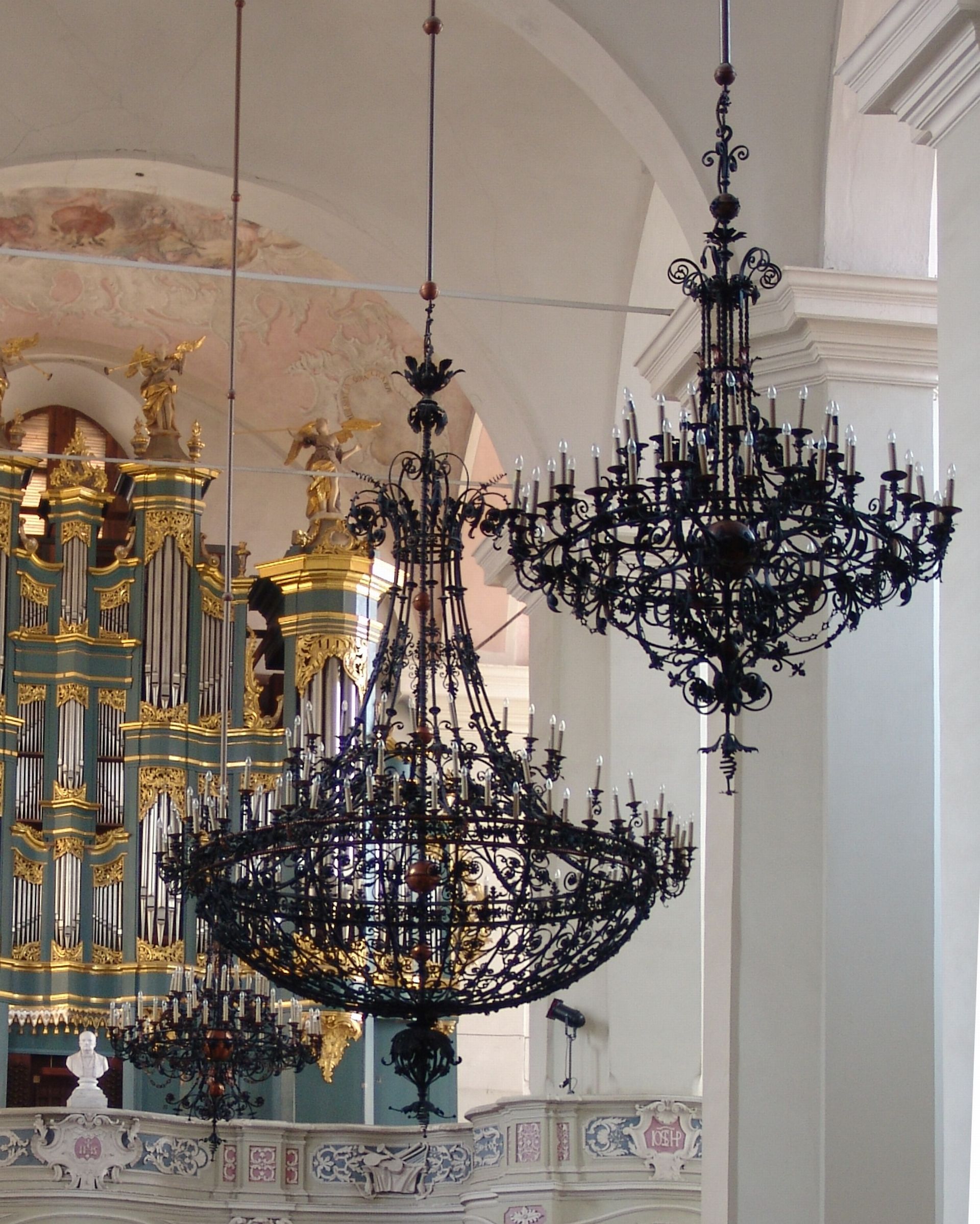 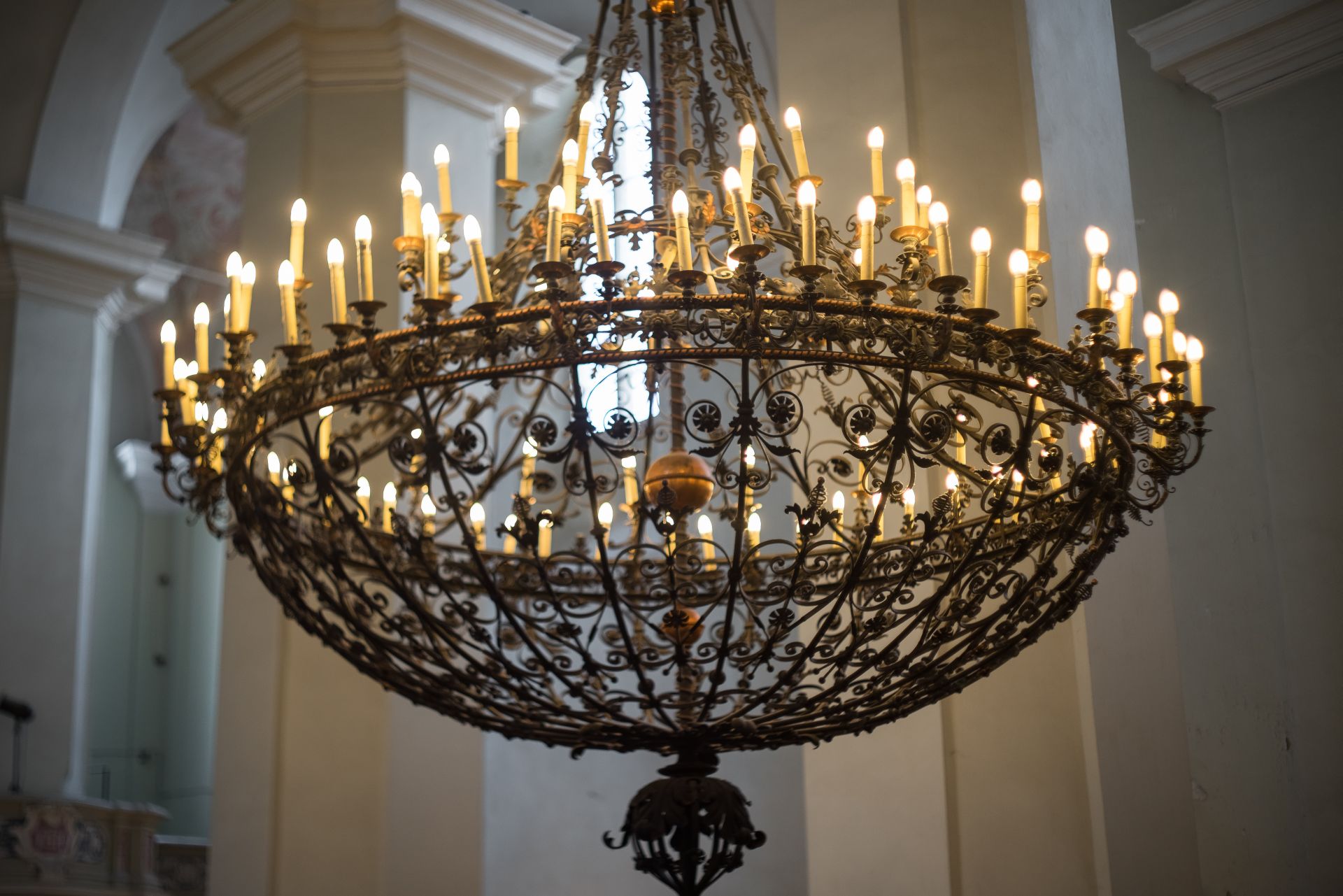 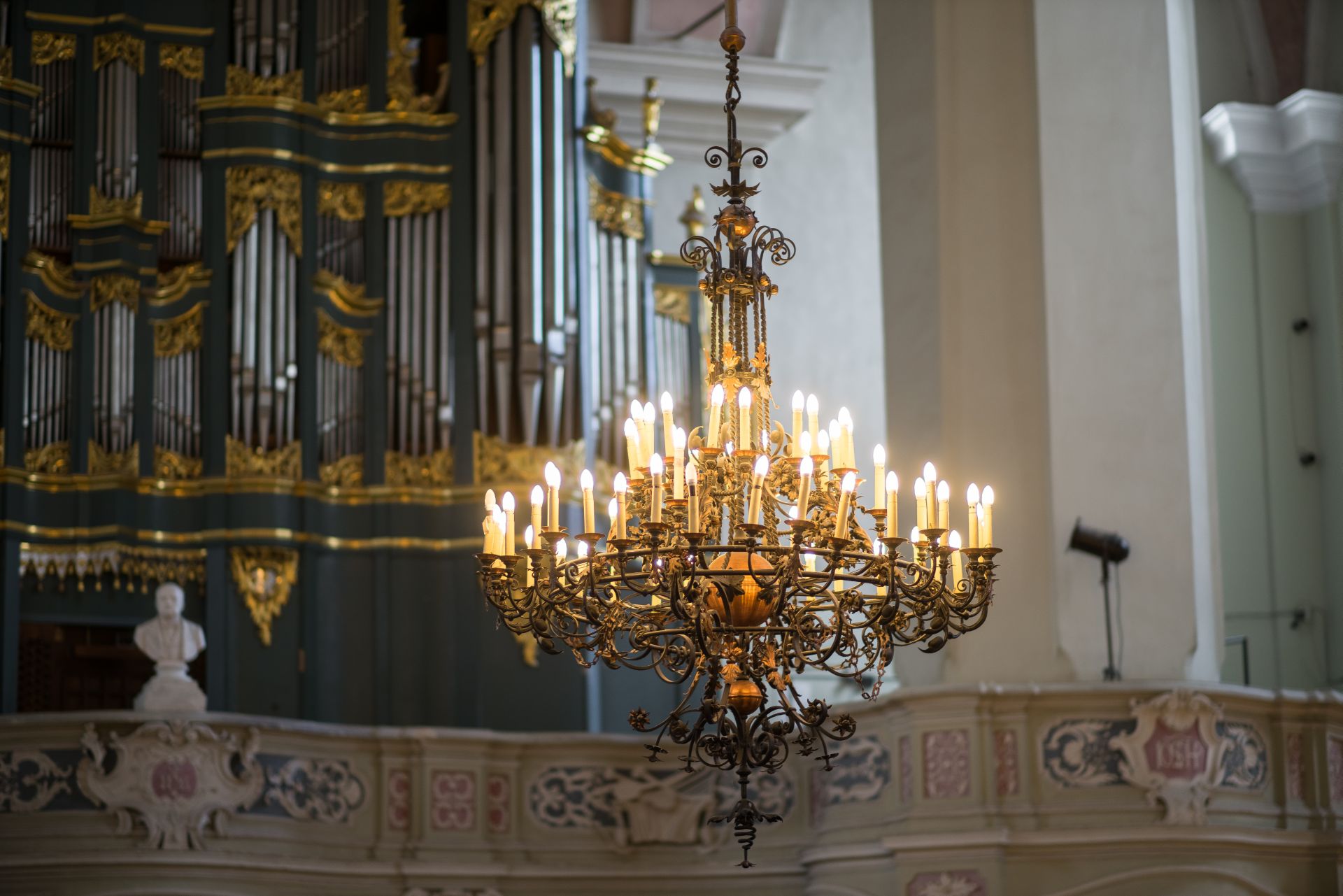 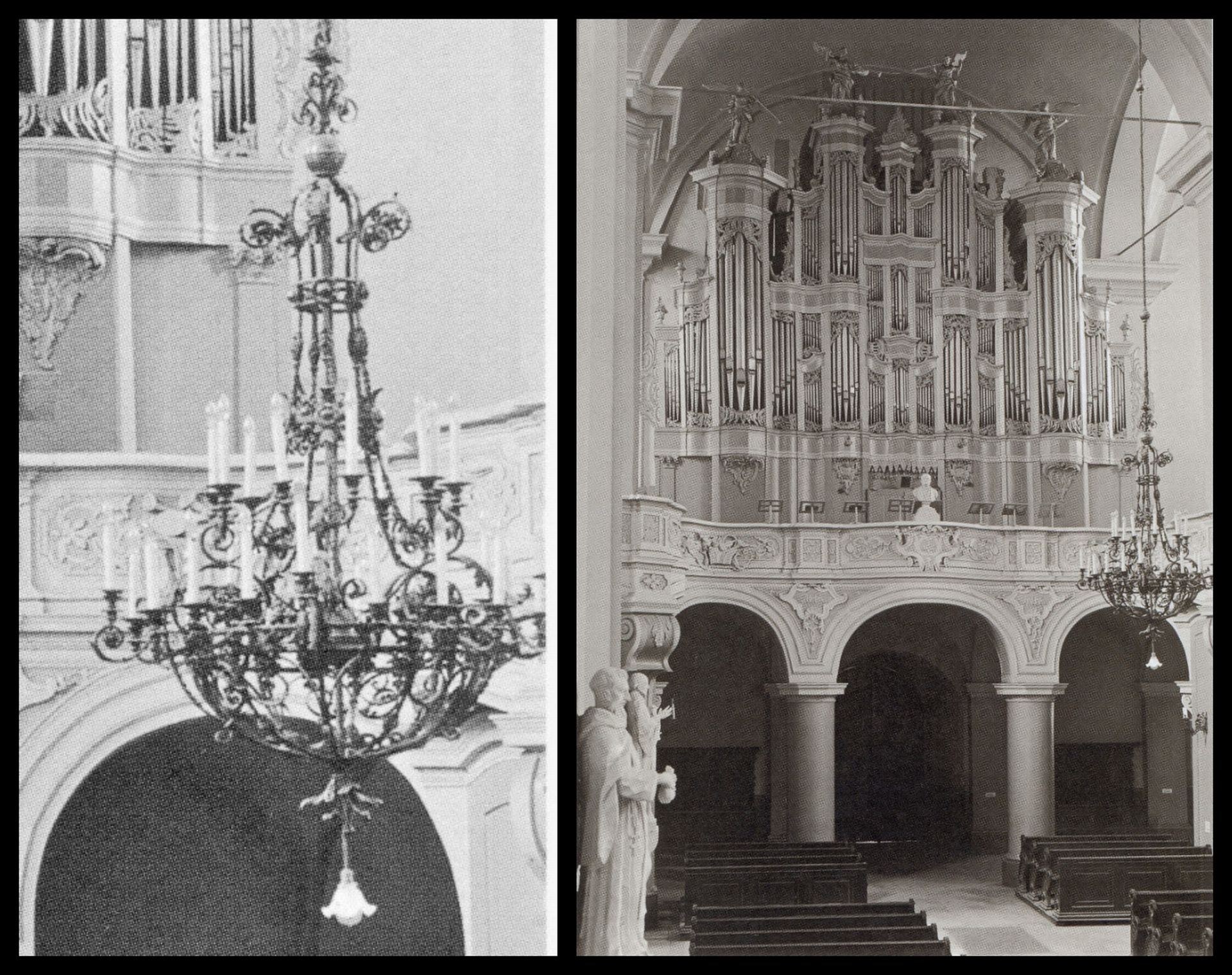 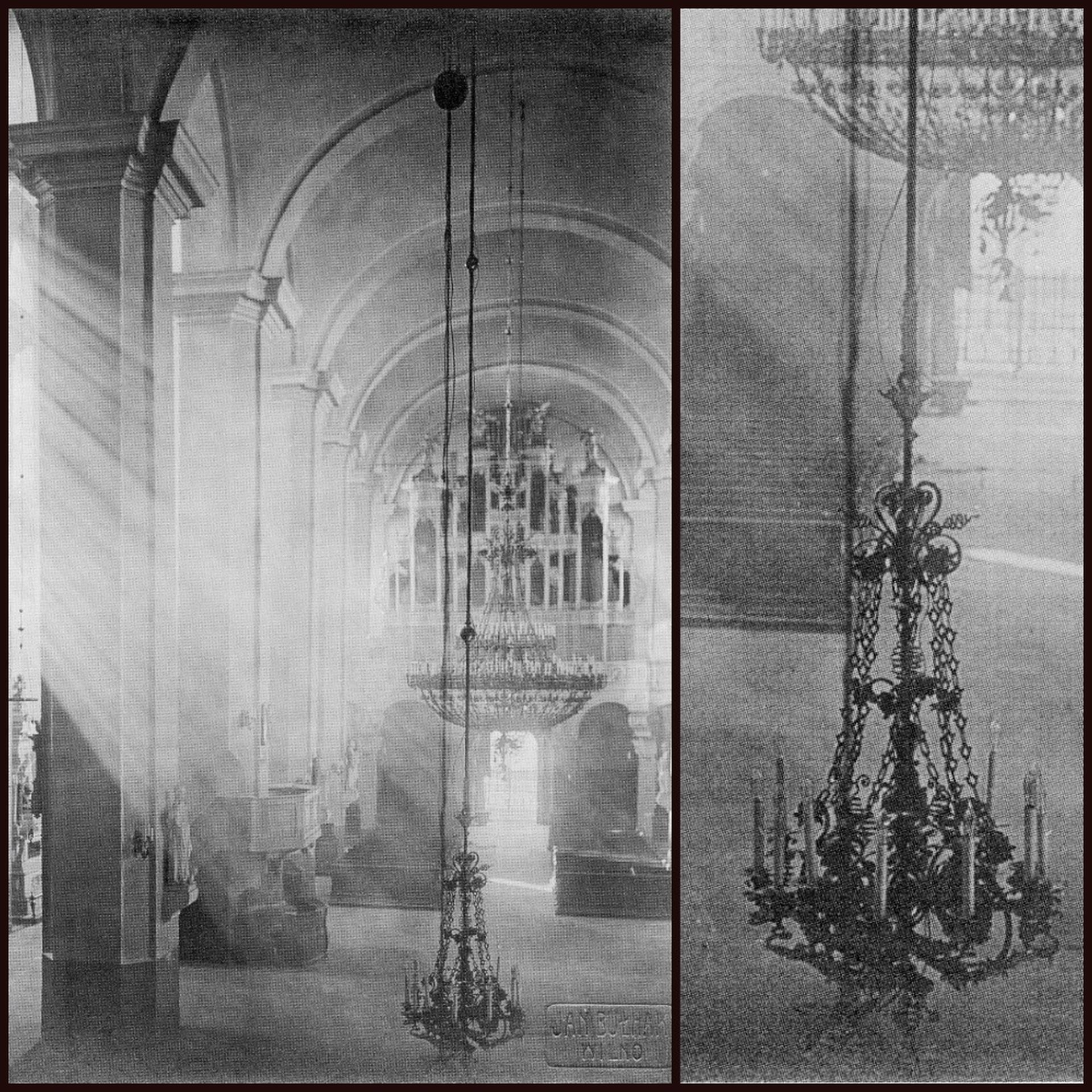 The Church of John the Baptist and St. John the Apostle and Evangelist in Vilnius

The unique code in the Cultural heritage register – 8350

One of the most impressive and largest chandeliers in Vilnius decorate the church of St. John the Baptist and St. John the Evangelist and the Apostle. The surviving photographs by Jan Bułhak from the early 20th century show that at this time in the church were four forged chandeliers and four solid candelabras placed on the ground. Most of the set survived. However, around 1979, the smaller chandelier hanging closer to the organ choir disappeared, and there was no longer the smallest chandelier hanging next to the high altar.

The date of the appearance of the chandeliers is prompted by the benefactor’s inscription on two large candelabras in the presbytery: “Ofiara // Tadeusza Odyńca // 1900/1 roku” (benefaction from Tadeusz Odyniec, 1900/1). Tadeusz Odyniec was a landlord of Kumelioniai. In 1901, he erected a memorial monument in this church at his own expense for the uncle poet Antoni Edward Odyniec (1804–1889). It is not clear whether the landlord benefited only these two candelabras or the whole set of tracery chandeliers. However, due to the similar stylistics of the wares, they are all attributed to the early 20th century.

In the absence of detailed written sources, the stylistics helps to attribute the works. Large metal wares of similar plastic (e.g., a pulpit and altar rail for the church in Žąsliai) were manufactured in the metal workshop of Zygmunt Szczensnowicz in Vilnius at the turn of the century. However, looking at the wares of the ironwork workshop by engineer Petras Vileišis, it is likely that the huge set of four chandeliers and four candelabras was one of the first orders made professionally by this factory.

Chandeliers specifically designed for this church are single pieces of art. The author(s) of the project gave the greatest chandelier the shape of a basket that originated during the Classicism. The ornament from the hearts is „interwoven“ between the structural rods. It is quite typical and common on the building’s balcony rails in the second half of the 19th – 20th century. One hundred sconces surround the ring of the great chandelier in two rows, and the arms that hold them are masterly twisted. Forged acanthus leaves with beads decorate the top. The same leaves like with the rolling dewdrops are on two flower stands made by the mechanical workshop of Petras Vileišis (preserved in Petras Vileišis Palace). The stem of the chandelier, like stems of flower stands, is spirally wound with a metal band, which again confirms the possible authorship of the wares.

We should be grateful for the preservation of these impressive chandeliers to Vladas Drėma, who led the restoration of St. John’s church and the famous blacksmith Algirdas Stankus. In 1984–1990, he renewed the heavily perished set of chandeliers and added new wares to the set. After studying the composition of the chandelier next to the high altar, master forged a new chandelier that is integrated into the organ, instead of the missing one in 1979.

The photograph by Juozapas Čechavičius from 1874–1880 (preserved in the Vilnius University Library) evidences how the interior of the church looked like without solid metal chandeliers. It shows glass chandeliers that are lowered down and rotate around its axis. With their fine silhouette, they do not fill an empty-looking nave.

The chandeliers from the church of John the Baptist and St. John the Apostle and Evangelist in Vilnius are the only forged chandeliers of such an impressive size in Lithuania. They are not gilded and without crystal pendants, but luxurious because of their black tracery. The chandeliers are valuable as local, high-quality blacksmithing works, undoubtedly in competition with other luxury chandeliers in Europe.