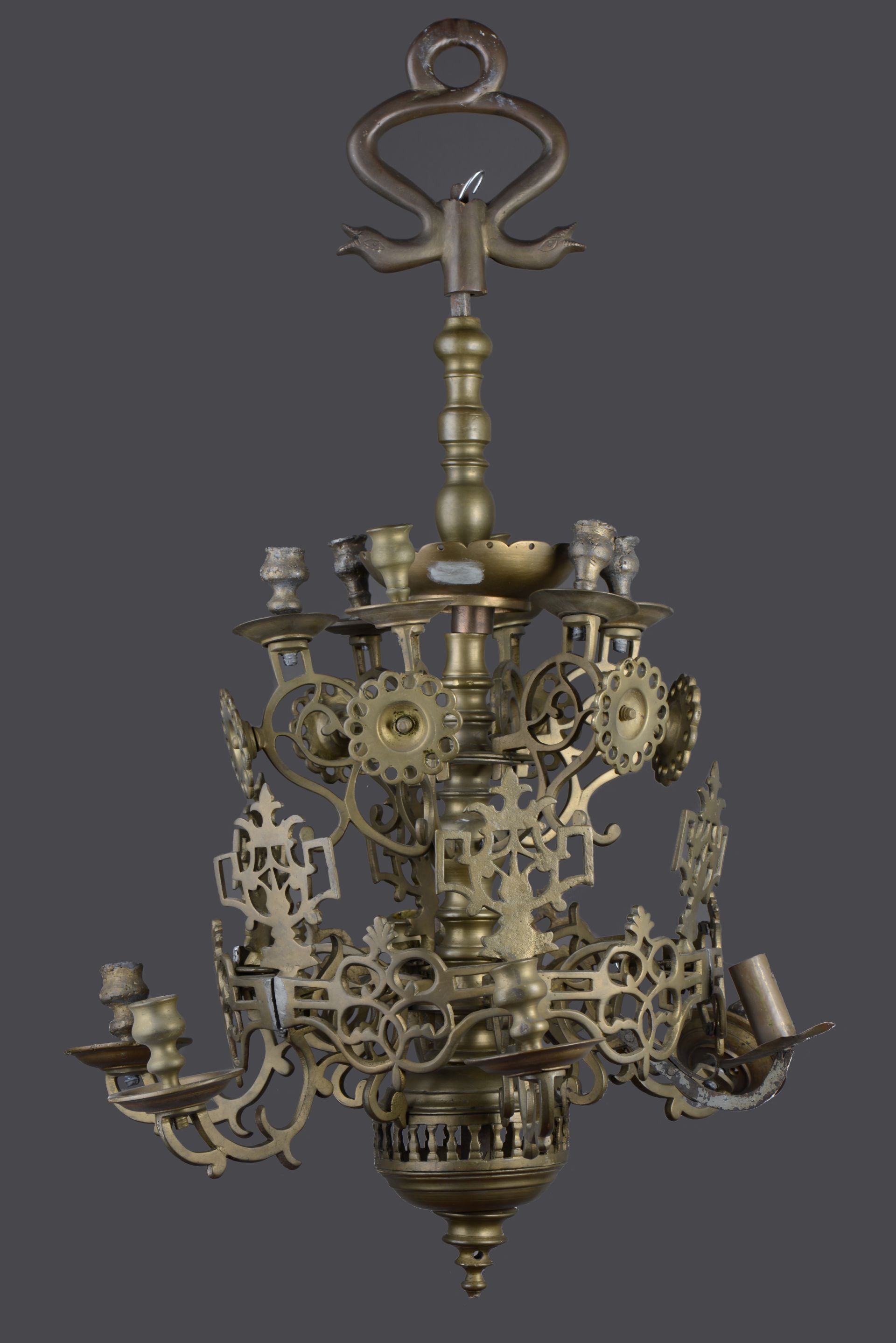 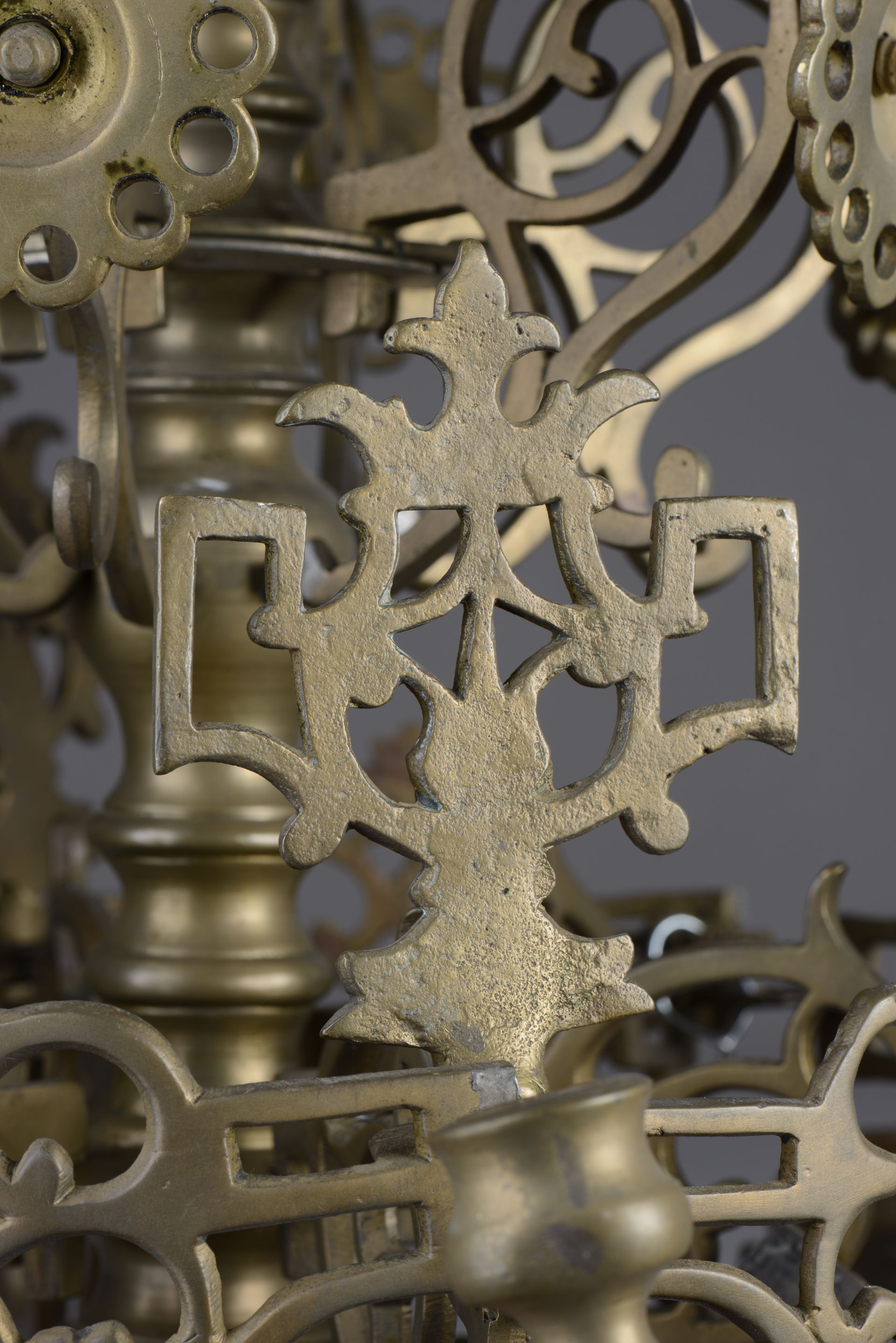 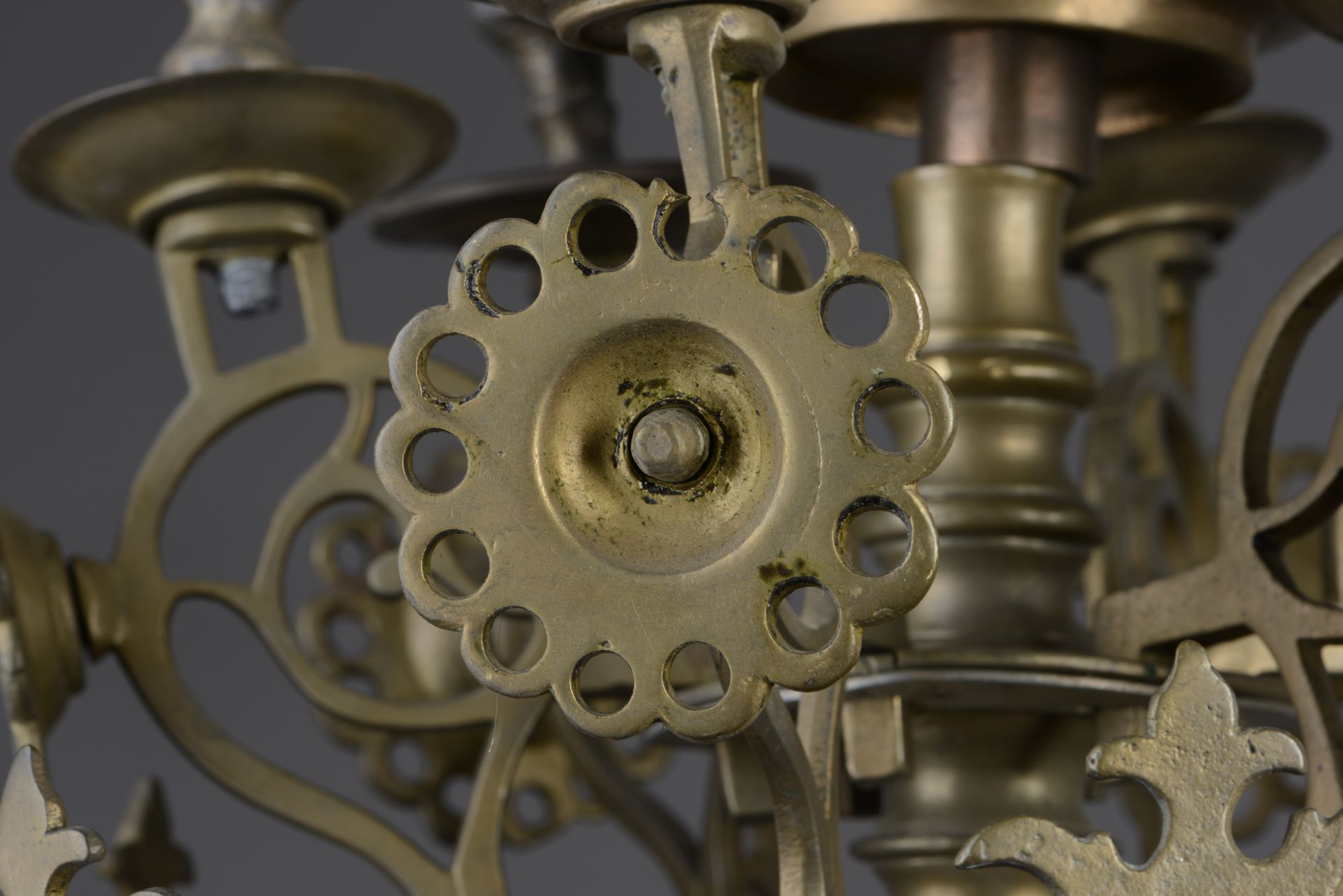 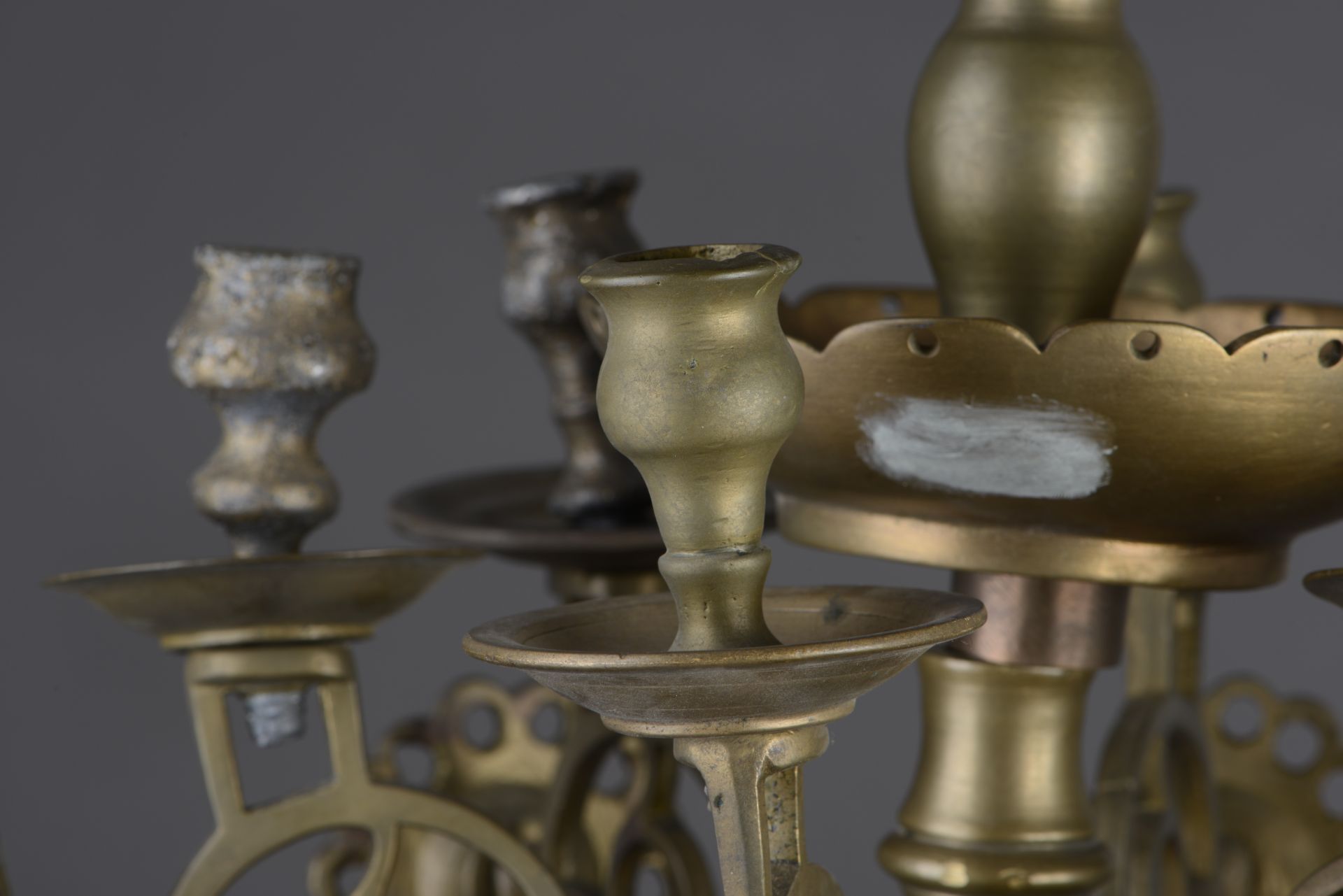 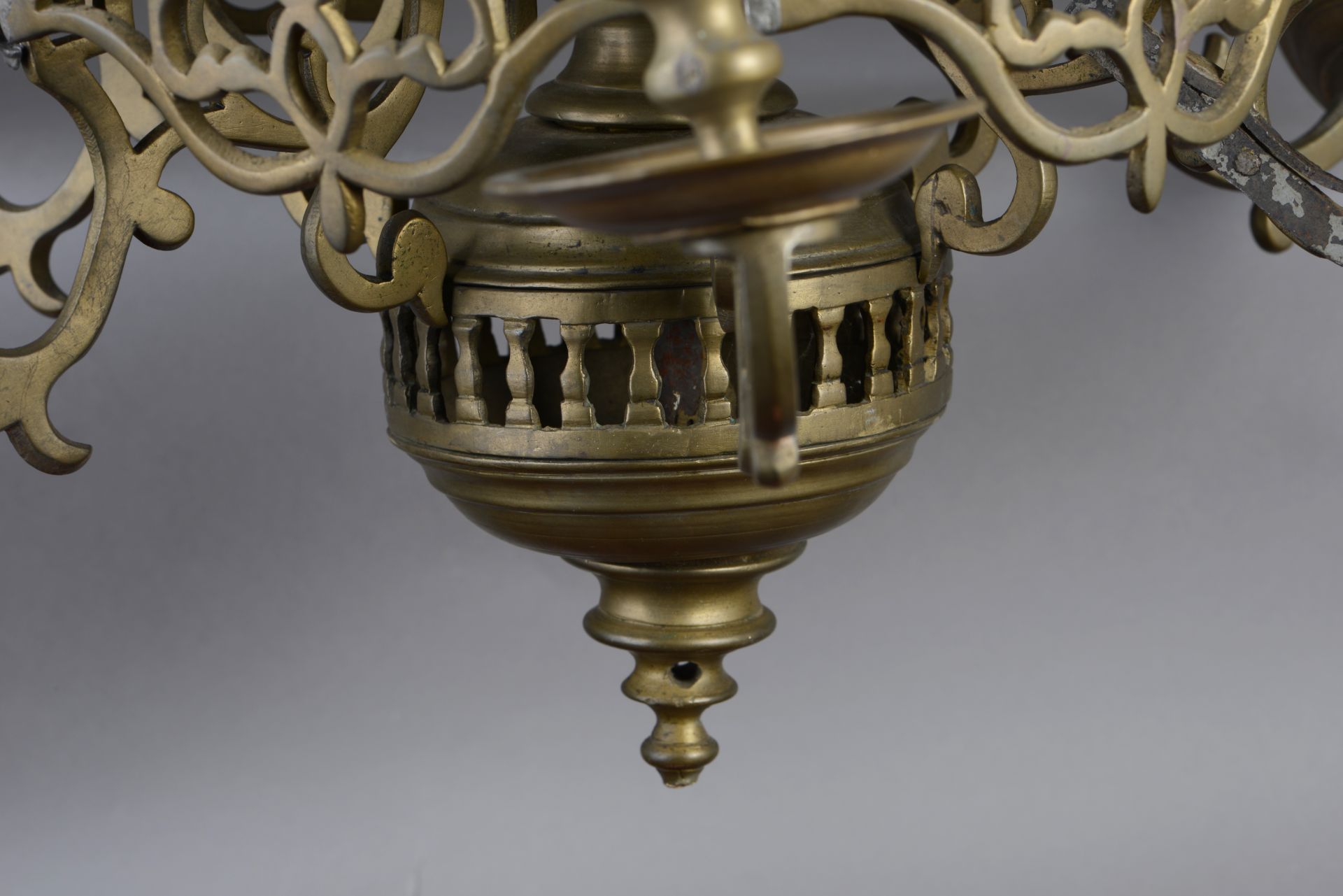 A chandelier preserved in the Trakai History Museum belongs to the oldest and the most common stem type. Such lighting devices with a large sphere at the bottom of the stem were started to produce in the Netherlands along with the establishment of Baroque culture in the 17th century. They are widely spread throughout Europe, and because of their origin are often referred to as Flemish or Dutch chandeliers.

The chandelier’s stem is threaded from profiled tubes and two drilled discs to receive arms. A large loop for hanging is at the top and a sphere beneath the stem. It is much smaller than the typical old Flemish-type chandeliers in Europe. However, its size is typical for chandeliers survived in Lithuania. The arms of the chandelier are arranged in two stories: six arms at the top and six at the bottom. The arms in the upper storey are with stylized flower-shaped reflectors. Their analogues are found in the works of the historical region of Galicia (a territory belonging to present-day Ukraine and Poland) in the second half of the 18th century [2]. Tracery wreaths with panels encircle the lower arms. Their elaborate ornament is typical of the Jewish Hanukkah candelabrum. Like the stylized flowers, the openwork panels had not only a decorative function but also reflected and intensified the candlelight.  At the top of the chandelier, on the hanging loop, two intertwined serpents are shown. The cult of the serpent is especially old in the history of the Jewish nation. Therefore, this is further confirmation that the chandelier once decorated and illuminated the interior of the synagogue.

The chandelier was restored in 1972. Most likely that the missing sconces were cast at this time. This chandelier is not the only surviving example of lighting in Lithuanian synagogues. A chandelier with a very similar structure is preserved in the M.K. Čiurlionis National Art Museum. An almost identical chandelier is documented in the photograph of the last century taken in a synagogue in Hlybokaye, Belarus [3].